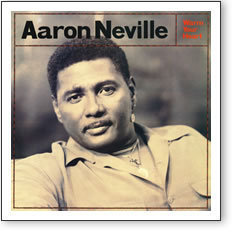 "A big multi-track production with Neville backed variously by The Grace Episcopal Choir, The Skywalker Symphony Orchestra and a host of stars including
Linda Ronstadt, Rita Coolidge, Bob Seger, Ry Cooder and Dr. John ...with the awesome sound on this record, this is a big winner.
Originally mastered by Bernie Grundman for A&M, the improvements in Grundman's mastering facilities over the last 20 years shine through on this two LP 45 RPM reissue."
- Dennis Davis, HiFi+ Magazine, 10/10 Recording, 9/10 Music
Produced by: Linda Ronstadt and George Massenburg
Engineered by: George Massenburg
Mixed by: George Massenburg and Nathaniel Kunkel
Mastered by: Bernie Grundman at Bernie Grundman Mastering

Well before Aaron Neville's gorgeous warble turned to wobble and he began using it as vocal ground cover—so much so that Saturday Night Live easily satirized it—his was a gorgeous instrument capable of both technical excellence and exquisite emotional communication as this impeccably produced and recorded 1991 release demonstrates.

Warm Your Heart combines savvy A&R work that provided the New Orleans native with songs that touched his innards, warm and inviting instrumental backdrops that complement both the singer and the songs, and production and engineering by a George Massenburg led team that produced glorious sonics.

The tunes range from Randy Newman's "Louisiana 1927" (choral arrangement by Van Dyke Parks) to the closer "Ave Maria". In between are John Hiatt's "It Feels Like Rain" (with Ry Cooder on slide and Willie Greene and Bobby King adding background back-up),, Burt Bacharach's oft-covered "Don't Go, Please Stay" first recorded by The Drifters and the remake of Main Ingredient's '70s hit "Everybody Plays the Fool" that was also one for Neville.

It's one of the album's sonic highlights too and almost alone worth the price of admission, though the sound is more honest on "It Feels Like Rain" clearly recorded at Ocean Way.

Two Allen Toussaint songs, "With You In Love" and "That's the Way She Loves" help keep the album rooted in the Crescent City. as does "Angola Bound" the one Neville original and the album's hardest edged track (Angola is the Louisiana State penitentiary).

Bernie Grunman mastered this A&M release when it was first issued and he does the honors here at 45rpm from the original analog master tapes (though given the numerous recording venues and complex production as well as some sonic variance among the tracks I can't help but thinking that some elements were produced digitally). "Tip on" gatefold packaging adds luster. About the only negative I can add to this well-packaged "must have" reissue is that RTI let me down. My copy was well pressed, but the second record was abraded from what looks like poor handling and so had occasional crackling sounds on side 3.

A highly recommended demo disc— If you do, I am certain you will not be disappointed. 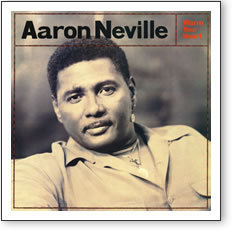