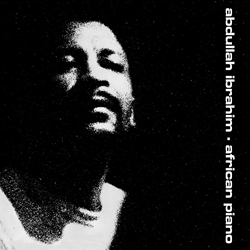 £19.99
Price includes VAT, plus delivery
Possible delivery methods: UK Tracked with Signature, Airmail Standard, UK Express, Airmail Tracked with Signature, UK Standard, Heavy Item
ECM - 3743555 - 180 Gram Vinyl - Limited Edition -
African Piano was a highly influential album, and it has lost none of its power - as can be heard on this new 180g vinyl reissue. Both versions are released for the first time under the name Abdullah Ibrahim instead of the pianist's original 'Dollar Brand' sobriquet.
Sometimes a musical message is so urgent that questions of recording quality are almost beside the point. Informally recorded in 1969 in a noisy club - Copenhagen's famous Jazzhus Montmartre - the flavour of this album is 'documentary' rather than luxuriantly hi-fidelity, yet the essence of Abdullah Ibrahim's communication comes through loud and clear. The listener is drawn into the robust rhythms of his solo piano style, as he re-examines the history of jazz from a South African perspective, with echoes of songs of the townships, and vamps that hint of Monk and Duke and much more.
At the beginning of 2014, ECM issues seven important recordings from its back catalogue, all in 180g vinyl  most of which have been out of stock for many years. For the LP , the original analog recordings are issued in deluxe cardboard sleeves.
Personnel: Abdullah Ibrahim (piano)
Track Listings
1. Bra Joe From Kilimanjaro
2. Selby That The Eternal Spirit Is The Only Reality
3. The Moon
4. Xaba
5. Sunset In The Blue
6. Kippy
7. Jabulani - Easter Joy
8. Tintiyana