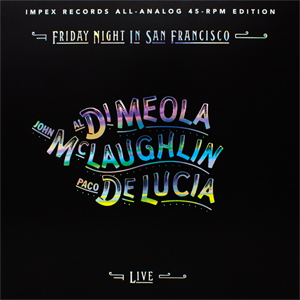 This famously outstanding recording has been reissued several times—and this latest edition from Impex sounds fabulous. Cut from the original analog tapes by Chris Bellman and Bob Donnelly at Bernie Grundman Mastering The hall’s acoustic is wide and deep, with the placement of the group onstage quite natural relative to the audience. The playing is thrilling to hear, and sometimes amusing, as with the playful back and forth between McLaughlin and Di Meola during Chick Corea’s “Short Tales of the Black Forest.” Limited to 3000 copies. Highly recommended.- TAS

Kudos to Impex Records on a fantastic reissue of an album that has always been special to many people - Friday Night in San Francisco. The music comes from a trifecta of incredible guitarists: Al Di Meola, the late flamenco maestro Paco de Lucía, and the one-and-only John McLaughlin. Pressed on 180g vinyl, the double LP set is superbly remastered. Impex Records is one of the best audiophile labels around. If you liked the original recording from 1981, you must check out this new edition. Rhythm Planet,

Every note.
Every lightning strum.
Every impossibly perfect run.
Every dynamic blast.
Every tonal nuance.
Every staccato reverberation.
Every unexpected moment of towering virtuosity.
Every caught breath.
Every thunderous applause.

Everything you've loved about this iconic, reference-defining recording is laid bare, reproduced with stunning fidelity and nuance. Featuring all-analog mastering by Chris Bellman at Bernie Grundman Mastering and an exclusive foil-stamped jacket for this very special release. This Di Meola-McLaughlin-De Lucia classic could only come from the LP fetishists at Impex Records.

Listen as Impex's 180g vinyl, spinning at 45 revolutions per minute, reveals everything to your hungry, deep-listening ears. Ready to redefine definitive again.