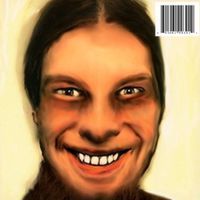 Released in April of 1995, ...I Care Because You Do is the third studio album Richard D. James recorded under the Aphex Twin moniker and marks the end of his initial analog era. It’s also the crowning achievement in the Aphex Twin canon.

Veering from his previous acid house, ambient and general techno undertakings, James builds compositions out of lengthy and intricate drum machine loops, elaborately layered analog synths and intermit- tent string pieces. The final product comes off like a Replicant dance- party. Never one to take his art too seriously, James infuses ...I Care Because You Do with in-jokes and innuendos. “Ventolin,” named after an asthma medicine, is one of the harshest tracks on the album and features a high-pitch frequency that mimics symptoms of tinnitus; “Alberto Balsalm” is named for a British line of hair care products; “Come On You Slags” samples dialog from a pornographic film. Ad- ditionally, several of the song titles are anagrams: Aphex Twin is re- worked as “Wax the Nip”, The Aphex Twin morphs into “The Waxen Pith,” “Wet Tip Hen Ax,” and “Next Heap With,” and Richard David James becomes “Acrid Avid Jam Shred.”