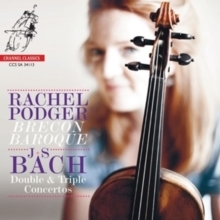 For this listener the highlight of this SACD is the brilliant performance of the Triple Concerto in A minor BWV 1044. All three of its movements are based on Bach's earlier solo keyboard works and in its present form has the same scoring as the 5th Brandenburg Concerto. The richness of the writing is immediately apparent, and special praise must be given to the adroit harpsichord of Marcin Swiatkiewicz whose playing never dominates that of his partners – especially the bright flute of Katy Bircher. Competition from rival versions on record in this repertoire is intense, but the vivacity and depth of musical utterance of these performances - allied to a state-of-the-art recording - makes this an irresistible disc and one to be unreservedly recommended. Sound 5/5 Music 5/5 HRaidio

Drawing on the precedents of Vivaldi and others, Bach’s probing musical intellect led him down novel paths of invention where the collaborative and antagonistic features of the genre reached unprecedented levels of complexity. (...) The state of the surviving musical sources for Bach’s concertos suggests that he produced them for a variety of contexts, whether the courtly milieu of Köthen, the urban setting of the Collegium Musicum in Leipzig, or even for his own domestic entertainment. This was music that he was willing to rework for different occasions, and each of the concertos on this disc existed in more than one version.