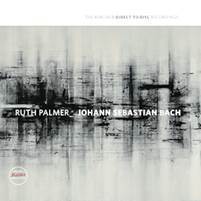 featured Josephson C722 microphones and DGG custom-made microphone preamps. Set the volume correctly and you’ll be in the room. The sound is sweet and transparent as you’d expect with no tape or digital processors between Palmer and the cutting head. 10/10 Michael Fremer

The sound? In a word, glorious. It’s doubtful that you own a violin recording that is closer to the true timbre than this one I recommend this recording for Ruth Palmer’s performance, the incredible beauty of her violin tone, and excellent sonics throughout 5/5 TheAudioBeat

t was Ruth Palmer’s wish to couple Bach’s Sonata in C major with nothing but the Partita in E major. A perfect length for an LP, but too short for a CD. That was when the idea was born to produce this programme as a purely analogue Direct-to-Disc recording. Ruth Palmer’s Bach recordings are like an excursion on many levels. They testify to power, a lust for life and a deep understanding and engagement with Bach. With over 27 minutes playing time on the A-side, we have here what is probably one of the longest Direct-to-Disc LPs in recording history.