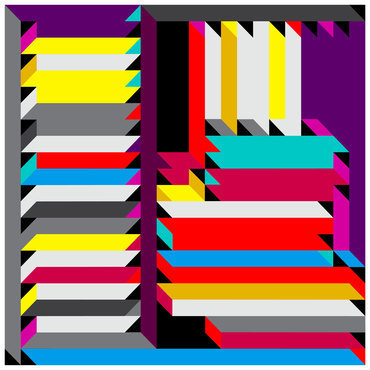 Battles return with their fourth album Juice B Crypts on Warp Records to follow their complex, mind-bending predecessors Mirrored, Gloss Drop, Dross Glop and La Di Da Di. Their latest album is a sensory overload of information that throws everything you thought you knew about Battles into flux once again.

Battles return for their first LP since 2015 with their new album 'Juice B Crypts' and this record is as vibrant as anything they’ve ever done.

The band have said goodbye to longtime bassist/guitarist Dave Konopka and it helps that the remaining members (Ian Williams and John Stanier) are imperious musicians who can seemingly get their instruments to do pretty much whatever they want. Some of the playing here is simply breathtaking, the sort of thing that many bands would not even attempt to replicate (let alone pull off). Intricate, energetic cuts like ‘Juice B Crypts’ and ‘Ambulance’ have as much in common with the maximalist hip-hop of Flying Lotus and Iglooghost as they do with, say, Don Caballero.

The band have also recruited a host of guests to feature on the release, Shabazz Palaces, tUnE-yArDs and Liquid Liquid’s Sal Principato among those who join in the fun.

Juice B Crypts demonstrates once again that there are simply no other acts who can match Battles for musical invention.