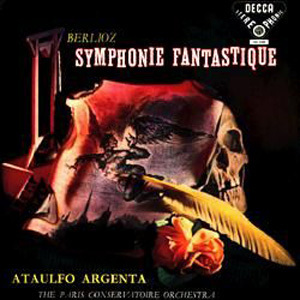 This is how a Berlioz Symphonie Fantastique should sound. And how incredible it sounds  This gorgeous sounding Decca is from November 1957 at Maison de la Mutualité, Paris by Ken Cress and produced by James Walker. It's a beautiful Decca, but also full of power and brimstone. The grand old orchestra, made up of teachers and pupils from the Conservatoire (disbanded in 1967 and reformed as the Orchestre de Paris), sounds good enough -- effective, evocative and powerful when required. But many of the solos are undistinguished and the brass playing can sound decidedly ropey! The bass trombone player is thinking croissants not crotchets! You'll be buying this LP for the sound and Argenta's fabulous conducting and interpretation. Everyone needs a great Symphonie Fantastique in their collection. Audiophiles need this one. Again, these exquisite Speakers Corner reissues are not cheap. But you'll get a lifetime Symphonie Fantastique. Full of French character heard through a legendary recording. Very highly recommended. -Audiophilia

It's easy to understand why Speakers Corner chose this LP for re-issue. One of the earliest Decca recordings this is also one of the finest. Argenta's reading of Berlioz's work puts you right in the front row. Sound is amongst the best that Decca/London ever achieved. Huge soundstage with tons of depth and air. A sonic knockout that really pushes the envelope musically and sonically. The music and conductor were made for this recording.One of the great ones. Get it no while you still can. You'll love it! Recommended - 5/5 LPreview...

Behind the mysterious title Symphonie fantastique is to be found what was undoubtedly one of the most powerful musical compositions of its day. The highly controversial discussions which this autobiographical, extraordinary work provoked are quite understandable when one considers that Beethoven and Schubert had just put down their quills for the last time and that Wagner had only just left his childhood behind him. In commenting upon the daring cyclical structure of the work, one French music critic said, “In Berlioz’s Symphony we believe that we have seen the prelude to a revolution in instrumental music”.

In spite of being acknowledged and praised as a composer, Berlioz was never given the professorship he coveted at the Paris Conservatoire, and it might appear as if the renowned Conservatoire Orchestra was making its apologies for this in the present excellent recording. The various scenes of the intoxicating programme music are approached with daring; dreadful, macabre ideas are presented in a low, gloomy and dark timbre until finally a heroic attitude comes to the fore, accompanied by thundering drum rolls, when the death sentence is pronounced. Fantastique!