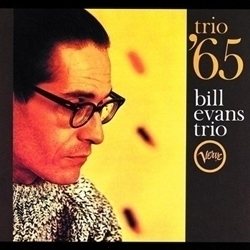 Acoustic Sounds Series reissues from Verve/Universal Music Enterprises!
Monthly releases highlighting the world's most historic and best jazz records!
Mastered by Ryan K. Smith at Sterling Sound from the original analog tapes
180-gram LPs pressed at Quality Record Pressings!
There's scarcely a more towering figure in modern jazz — save Miles and Coltrane — than the great Bill Evans. His relaxed and emotional style at the piano would prove influential to not only his peers but to generations of pianists who would follow him.
It also doesn't hurt, points out thejazzrecord.com, that he appeared on (and had great influence over the direction of) Kind Of Blue and that the two LPs from his trio's landmark stint at the Village Vanguard in 1961 (Waltz For Debby and Sunday At The Village Vanguard) are both stone-cold classics.
Evans is joined here by none other than bassist Chuck Israels and drummer Larry Bunker for this 1965 recording. The album includes the heart-wrenching "Who Can I Turn To?" alongside "If You Could See Me Now" and Johnny Carisi's "Israel."
"Although all eight of the selections heard on this Verve release have been recorded on other occasions by pianist Bill Evans, these renditions hold their own," writes AllMusic.
Musicians:
Bill Evans, piano
Chuck Israels, bass
Larry Bunker, drums
Side A
1. Israel
2. Elsa
3. Round Midnight
4. Our Love Is Here To Stay
Side B
1. How My Heart Sings
2. Who Can I Turn To?
3. Come Rain Or Come Shine
4. If You Could See Me Now