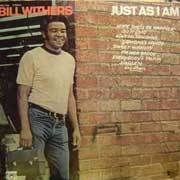 Rolling Stone 500 Greatest Songs of All Time - "Ain't No Sunshine" -

"…This doesn't sound like a debut because it is backed up by years of song writing and a mature, soulful voice that is honest and warm. This is a superb album for the quality of songs, singing and a backing that contained Stephen Stills (guitar), Donald 'Duck' Dunn (bass) and Jim Keltner (drums) among others…This is a beautiful sounding LP and Speakers Corner has done a superb job as ever. Bill's Greatest Hits sounds pale by comparison." Recording = 9/10; Music = 10/10 – Jason Kennedy, Hi-Fi+, Issue 56

Just As I Am served as the launching pad for one of the most prolific songwriting careers of our time. Just As I Am catapulted Bill Withers into super-stardom in 1971. Featuring the worldwide mega-hit and Grammy Award-winning "Ain't No Sunshine", Just As I Am, Withers' debut album, established him as one of the premier singer/songwriters of the era and brought the world a fresh look at Rhythm & Blues.

Equipped with an acoustic guitar and backed by three-quarters of Booker T. & the MGs and Stephen Stills on guitar, Bill Withers recorded one of the biggest albums of the '70s, producing the timeless hit "Ain't No Sunshine" along with the other Withers essentials "Harlem", "Grandma's Hands", and "I'm Her Daddy".

As a testament to his talents, Bill Withers was inducted into the Songwriters Hall of Fame in 2005. "When the 31-year-old Withers recorded 'Sunshine,' he was still working at a factory making toilet seats for 747s. He intended to write more lyrics for the part where he repeats the phrase 'I know' 26 times, but the other musicians told him to leave it." -

In a career laden with highlights and hallmarks in the annals of soul history, Just as I Am gets rather overlooked as one of the best soul debuts ever issued. , Just as I Am gets cleaned up and presented to a new generation of listeners who may have missed out the first time. And with this remastering comes an intimacy, warmth, and immediacy to the recordings that was only hinted at with previous versions; it's almost as if Withers is in a living room singing to a small group of people, rather than making a record. Of course, the instantly recognizable anthem "Ain't No Sunshine" gets all of the acclaim it so richly deserves, but tracks like "Harlem" and "Better Off Dead" also warrant kudos for the intensity and maturity of their performances. Even when he's doing covers, Withers treats them as if they are his own compositions and handles them with great delicacy. 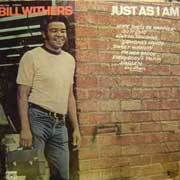