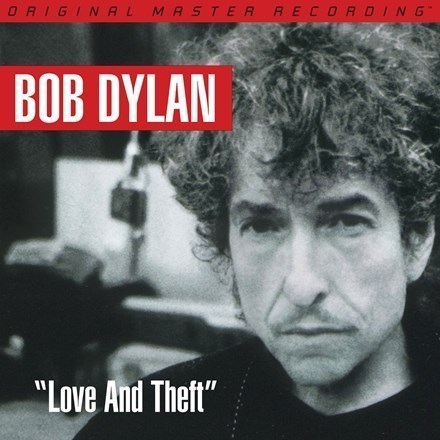 Let me convince you otherwise: the bottom end on this pressing is something to behold. This isn't the place to debate late-period Dylan, but Love And Theft, 20-years-old this month, wasn't just one of his better post-1975 works. For some, it's up there with Blood On The Tracks. It's engaging, hugely listenable and one of the best-sounding Dylan albums since his early, classic 1960s Columbia recordings. KK HifiNews

Mastered from the Original Master Tapes and Strictly Limited to 3,000 Numbered Copies:

Bob Dylan's Love and Theft is a visionary train ride through the vast American landscape and all its hills, valleys, mountains, river towns, and urban and rural settlements. As they burrow into villages and barrel across trestle bridges, the 2001 record's songs introduce us to outlaws, outliers, gamblers, brawlers, tricksters, bootleggers, and scoundrels. It is, in effect, a commanding survey of and plunge into American music. Named the best album of the year by Rolling Stone and the Village Voice's Pazz & Jop Critics Poll, anointed the second-best album of the decade by Newsweek, and later declared the 385th Greatest Album of All Time by Rolling Stone, Love and Theft remains the Nobel Laureate's finest effort since 1975's Blood on the Tracks – and an extension of the jesting, imagery, and free-form looseness present on his seminal 1960s works. Now, it possess knock-out sound.

Mastered from the original master tapes and strictly limited to 3,000 numbered copies, Mobile Fidelity's transparent reveals the you-are-there immediacy of Dylan's production and the colorful textures inherent to every passage. Experienced on this audiophile version, the songs possess a sense of swing and naturalism so sure-footed that they seem to float, with Dylan and his crack ensemble setting up as a live band taking down the house in a deep-in-the-woods Louisiana shotgun shack. Prized aural traits such as presence, imaging, separation, and soundstaging depth don't come better. This is the very definition of sonic chemistry.

Drawing from roots-based styles that always inspired him – including blues, vaudeville, country, jazz, swing, and folk – Dylan turns in a masterwork that references the past without reverentially giving into it. Hence, each composition is vital, contemporary, timeless, and, ultimately, classic. As esteemed critic Greg Kot observed in his salient review of the Grammy-winning effort for the Chicago Tribune: "This is a tour of American music – jump blues, slow blues, rockabilly, Tin Pan Alley ballads, country swing – that evokes the sprawl, fatalism and subversive humor of Dylan's sacred text, Harry Smith's Anthology of American Folk Music, the pre-rock voicings of Hank Williams, Charley Patton and Johnny Ray, among others, and the ultra-dry humor of Groucho Marx."

Similarly, the scope of the record – along with its mysteries, riddles, and fantasies – wasn't lost on Rolling Stone scribe Rob Sheffield, who mused: "The music evokes an America of masquerade and striptease, a world of seedy old-time gin palaces, fast cash, poison whiskey, guilty strangers trying not to make eye contact, pickpockets slapping out-of-towners on the back. Love and Theft comes on as a musical autobiography that also sounds like a casual, almost accidental history of the country. Relaxed, magisterial, utterly confident in every musical idiom he touches, Dylan sings all twelve songs in a voice that sounds older than he is, a grizzled con man croaking biblical blues and Tin Pan Alley valentines out of the side of his mouth while keeping one eye on the exit."

Throughout, subtle changes in keys, tempos, and approaches adapt to the specific feel of each song – many of which were performed in the studio after Dylan played everyone vintage recordings by the likes of a Billie Holiday or Jimmy Rushing to establish the mood and manner he desired. The collective went from there. The resultant arrangements fit the lyrics to a proverbial "t." Consider the apocalyptic nature of the symbolic "High Water (for Charley Patton)," which doubles as a mini-history of the U.S.' racial strife as well as a metaphor for contemporary problems. Or the deceptive ease of the crooned ballad "Bye and Bye" that hides a clever kiss-off. Every song, every note matters. And whether via the swing of "Summer Days" (pregnant with a destructive ending), galloping death trip of "Tweedle Dee & Tweedle Dum," or desperate slide of "Honest with Me," Dylan and company turn each track into a powerful commentary on power, folklore, and myths.

"Things should start to get interesting right about now," Dylan sings in his trademark rasp on "Mississippi," the line doubling as an apt metaphor for every second of Love and Theft – one of the greatest records of our time. 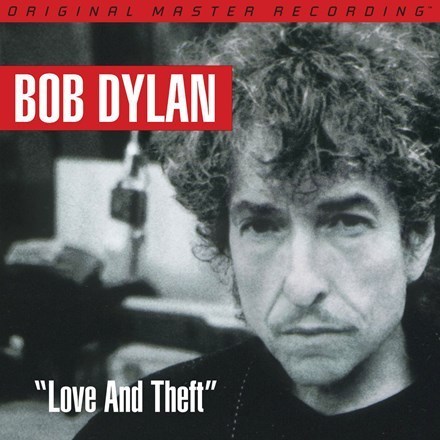