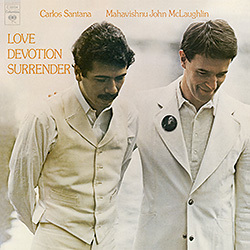 Speakers Corner 25 Years Pure Analogue  This LP is an Entirely Analogue Production
German label Speakers Corner has recognized the value of Love Devotion Surrender from Santana
and McLaughlin on the level we have and will offer fans of both their works a chance to own a
new, unplayed copy on 180-gram vinyl, housed in a reproduction gatefold set up - Sound Review
A hopelessly misunderstood record in its time by Santana fans -- they were still reeling from the radical direction shift toward jazz on Caravanserai and praying it was an aberration -- it was greeted by Santana devotees with hostility, contrasted with kindness from major-league critics like Robert Palmer. To hear this recording in the context of not only Carlos Santana's development as a guitarist, but as the logical extension of the music of John Coltrane and Miles Davis influencing rock musicians --
Two guitar giants. A collective band comprised of virtuosic instrumentalists. One shared goal. And one tremendous album, commonly referred to as the equivalent of aural nirvana. Still the only meeting of Santana and John McLaughlin, Love Devotion Surrender more than lives up to the promise offered by its principal creators as it’s a spiritual journey based in divine faith, religious toleration, and the forward-thinking philosophy that music can take us closer to the truth. These enlightening concepts are reflected in the playing of Santana and McLaughlin, who repeatedly hit a higher plane on this stunning 1973 set.

Having each become a follower of Indian guru Sri Chinmoy, Santana and McLaughlin began playing together in 1972, with each legend currently in the midst of personal and creative transition. Santana was moving away from rock-based songs in favor of exploratory jazz-rock fusion. McLaughlin had already achieved fame with the Mahavishnu Orchestra, on the brink of collapse due to disagreements within the band. On Love Devotion Surrender, the duo pools its interest in spirituality and transcendence into expressively gorgeous art steeped in improvisational lines, ecstatic chords, and sensitive organ accompaniment courtesy of the record’s best-kept secret, Larry Young.
In addition to the search for sacred soulfulness, the common denominator throughout is John Coltrane, who engaged in similar pursuits during the 1960s. Two of the five compositions are interpretations of Coltrane standards while the lynchpin, a nearly 16-minute investigation into the traditional “Let Us Go Into the House of the Lord,” seamlessly integrates melodic structure, jazz phrasing, gospel mysticism, and tonal shaping into one of the most hopeful and uplifting pieces of music you’ll ever hear.
Laden with delicate acoustic touches and gentle piano touches as well as powerful staccato bursts and fast-paced bongo percussion, Love Devotion Surrender contains a highly dynamic mix of tempos, textures
If you’re a fan of the guitar, jazz, or music that literally elevates you to an ethereal place, this is a must.
For some, "Love Devotion Surrender" is an album where, exceptionally, John McLaughlin plays the piano and organist Jan Hammer plays the drums. For others, it is the most spiritual album ever by Carlos Santana. And though both disciples were shown the way and inspired by the same guru (Sri Chinmoy) at one and the same time, this album is filled with the spirit of John Coltrane. In order to communicate their differing understanding and interpretation of Trane's music, the two musicians formed a 'project band' made up of members of Santana's ensemble and the Mahavishnu Orchestra. In their performance of "Love Supreme", Santana's somewhat dragging melody-maker role amalgamates with McLaughlin's high-speed staccato to a viscous drive. This approach functions just as well in slow motion: Coltrane's miniature, slow composition "Naima" is performed in a flowing and inspired manner by the duo on their acoustic guitars.
The arrangements carry Santana's hallmark: the occasionally somewhat intellectual but certainly not long-pondered-over sound is enhanced by the sound of agitated congo beats and the chanted vocals are heard as if from afar. By the time fans of Santana's major albums have got to the expansive gospel song "Let Us Go Into The House", they will have rediscovered their Carlos and his timeless solos once again. It is apparent that love and devotion are by no means just memorials of a time gone by but a surrender to oneself in its most perfect form.
Recording: 1973 by Glen Kolotkin
Production: Mahavishnu John McLaughlin & Carlos Santana
Mahavishnu John McLaughlin
Carlos Santana
Larry Young
Doug Rauch
Armando Peraza
Billy Cobham, Don Alias, Jan Hammer, Mike Shrieve
1. "A Love Supreme" (John Coltrane) – 7:48
2. "Naima" (John Coltrane) – 3:09
3. "The Life Divine" (John McLaughlin) – 9:30
4. "Let us Go Into the House of the Lord" (Traditional) – 15:45
5. "Meditation" (John McLaughlin) – 2:45 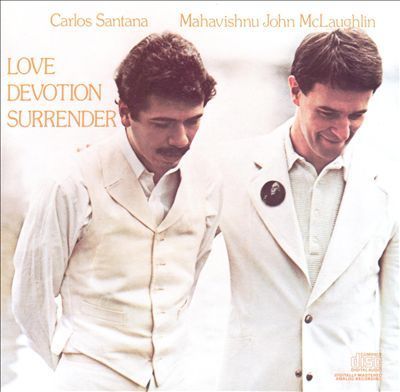 Are your records completely analogue?
Yes! This we guarantee!
As a matter of principle, only analogue masters are used, and the necessary cutting delay is also analogue. All our cutting engineers use only Neumann cutting consoles, and these too are analogue. The only exception is where a recording has been made – either partly or entirely – using digital technology, but we do not have such items in our catalogue at the present time
Are your records cut from the original masters?
In our re-releases it is our aim to faithfully reproduce the original intentions of the musicians and recording engineers which, however, could not be realised at the time due to technical limitations. Faithfulness to the original is our top priority, not the interpretation of the original: there is no such thing as a “Speakers Corner Sound”. Naturally, the best results are obtained when the original master is used. Therefore we always try to locate these and use them for cutting. Should this not be possible, – because the original tape is defective or has disappeared, for example – we do accept a first-generation copy. But this remains an absolute exception for us.
Who cuts the records?
In order to obtain the most faithful reproduction of the original, we have the lacquers cut on the spot, by engineers who, on the whole, have been dealing with such tapes for many years. Some are even cut by the very same engineer who cut the original lacquers of the first release. Over the years the following engineers have been and still are working for us: Tony Hawkins, Willem Makkee, Kevin Gray, Maarten de Boer, Scott Hull, and Ray Staff, to name but a few.
At the beginning of the ‘90s, in the early days of audiophile vinyl re-releases, the reissue policy was fairly straightforward. Companies such as DCC Compact Classics, Mobile Fidelity, Classic Records and others, including of course Speakers Corner, all maintained a mutual, unwritten code of ethics: we would manufacture records sourced only from analogue tapes.
Vinyl’s newfound popularity has led many other companies to jump on the bandwagon in the hope of securing a corner of the market. Very often they are not so ethical and use every imaginable source from which to master: CDs, LPs, digital files and even MP3s.
Even some who do use an analogue tape source employ a digital delay line, a misguided ’80s and ‘90s digital technology that replaces the analogue preview head originally used to “tell” the cutter head in advance what was about to happen musically, so it could adjust the groove “pitch” (the distance between the grooves) to make room for wide dynamic swings and large low frequency excursions. Over time analogue preview heads became more rare and thus expensive.
So while the low bit rate (less resolution than a 16 bit CD) digital delay line is less expensive and easier to use than an analogue “preview head”, its use, ironically, results in lacquers cut from the low bit rate digital signal instead of from the analogue source!
Speakers Corner wishes to make clear that it produces lacquers using only original master tapes and an entirely analogue cutting system. New metal stampers used to press records are produced from that lacquer. The only exceptions are when existing metal parts are superior to new ones that might be cut, which includes our release of “Elvis is Back”, which was cut by Stan Ricker or several titles from our Philips Classics series, where were cut in the 1990s using original master tapes by Willem Makkee at the Emil Berliner Studios. In those cases we used only the original “mother” to produce new stampers.
In addition, we admit to having one digital recording in our catalogue: Alan Parsons’ “Eye in the Sky”, which was recorded digitally but mixed to analogue tape that we used to cut lacquers.
In closing, we want to insure our loyal customers that, with but a few exceptions as noted, our releases are “AAA”— analogue tape, an all analogue cutting system, and newly cut lacquers.
Audiophile Vinyl - Made in Germany  For over 60 years the family business in the third generation of the special personal service and quality "Made by Pallas" is known worldwide. Our custom PVC formulation produces consistently high pressing quality with the lowest surface noise in the industry. Our PVC complies with 2015 European environmental standards and does not contain toxic materials such as Lead, Cadmium or Toluene. Our vinyl is both audiophile and eco-grade!