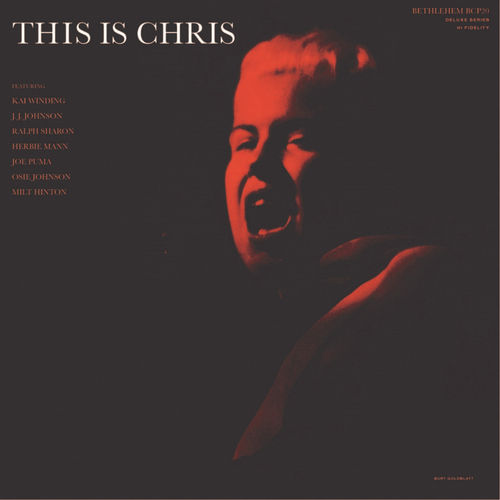 hi-fi+ August 2014 Review by Dennis Davis
Pure Pleasure’s Bethlehem reissue series continues with what may be the first audiophile reissue of a Chris Connor record. Recorded in 1955, This Is Chris was her last session for Bethlehem. An outstanding band backs Connor including J.J Johnson and Kai Winding on trombone, Milt Hinton on bass, Osie Johnson on drums, Ralph Sharon and John Puma playing guitar. Ten American songbook standards are each performed to perfection. Sounding quite close to Doris Day at her best, Connor’s interpretations hit the mark throughout.While you may sometimes prefer the way Billie Holiday wrung emotion from her Cole Porter, Connor’s lighter west coast style offers a different look into the songs. Legendary engineer Tom Dowd recorded the session and the mono sound is about as good as it gets for this pre-golden age recording with an almost stereo image thrown with Connor’s voice surrounded by the band. Lacking a bit of the frequency extension found on the modern recordings, this nevertheless comes close to ‘audiophile’ sound. Ray Staff in London; combined with Pallas’ fine pressing, this adds up to a first class package that is highly recommended.

Even if her name doesn’t ring any bells, this jazz chanteuse’s backing band will elevate the interest level: on this, her last release for the Bethlehem label before moving to Atlantic, she was backed by an amazing ensemble of Herbie Mann on flute and tenor, pianist Ralph Sharon, guitarist Joe Puma, bassist Milt Hinton and drummer Osie Johnson, plus one of my old man’s favs, the trombone duo of JJ Johnson and Kai Winding. Connor favoured material from Cole Porter, source of four of the ten tracks, but the gem just may be a cool reading of the Gershwins’ “Someone To Watch Over Me”. Mono, and as period-sounding as you’d expect from a recording made in ’55

During 1953-1955, singer Chris Connor recorded regularly for Bethlehem. This reissue LP has her final recordings for the label (before moving up to Atlantic) with such fine sidemen as Herbie Mann (doubling on flute and tenor), pianist Ralph Sharon, guitarist Joe Puma, bassist Milt Hinton, and drummer Osie Johnson. The two-trombone team of J.J. Johnson and Kai Winding (which had recently become very popular) is prominent on four of the ten selections. Connor's cool tone, subtle, emotional delivery and haunting voice were perfect for the music of the 1950s. Highlights of this superior set include "The Thrill Is Gone," "Blame It on My Youth," and "I Concentrate on You,"

Chris Connor, vocals
JJ Johnson, trombone
Kai Winding, trombone
Herbie Mann, flute
Joe Puma, guitar
Ralph Sharon, piano
Milt Hinton, bass
Osie Johnson, drums
Selections:
Side 1:
1. Blame It On My Youth
2. It's All Right With Me
3. Someone To Watch Over Me
4. Trouble Is A Man
5. All This And Heaven Too
Side 2:
1. The Thrill Is Gone
2. I Concentrate On You
3. All Dressed Up With A Broken Heart
4. From This Moment On
5. Ridin' High 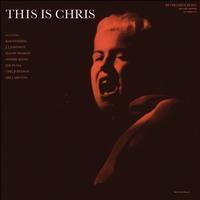