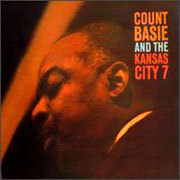 This record presents Count Basie in a fresh and unusual small-band context, one in which he permits himself more freedom than he ordinarily does with his big band. In October 1936, on his way East from Kansas City to his ultimate triumphs in New York, Count Basie entered a Chicago studio with a quintet and recorded, among others, two of the titles found here - Shoe Shine Boy and Oh, Lady Be Good. His Kansas City Seven was originated three years later, when he recorded with another small section of his band. The band had become world famous in the meantime, and the musicians he chose then were Buck Clayton, Dicky Wells, Lester Young, Freddie Green, Walter Page and Jo Jones. They rode once more in 1944, with Rodney Richardson in place of Walter Page, but it was not until March 1962, when this album was recorded, that Basie called out Kansas City Seven again. Time brought great changes to jazz during those eighteen years, and the changes were inevitably reflected in Count Basie's band, in its music and in its personnel. His basic policy nevertheless went unchanged, and the emphasis remained on swinging, forthright and relatively uncomplicated jazz. session ReAlthough for many fans the equation Count Basie = Big Band Jazz is quite undisputable, one has to agree that when one listens to these eight numbers: less is more when it comes to swing. Bob Thiele, Impulse producer, came to the conclusion that even with a meager budget a whole lot of music with a terrific sound could be squeezed into the grooves. As always, the great soloists of the Basie big band are on top form: first and foremost Frank Wess who demonstrates how rightly popular the flute is for its sound-coloring and as a solo instrument.  Thad Jones on the trumpet is quite outstanding in all the numbers – and is equally important as composer and arranger. The 'All American Rhythm Group Number 1' consisting of the Count, Freddie Green, Eddie Jones and Sonny Payne deliver one adrenaline-like thrill after another – without ever neglecting the jazz beat. All in all this is an important LP from the Impulse label, whose quality is greatly enhanced by the transparent sound.