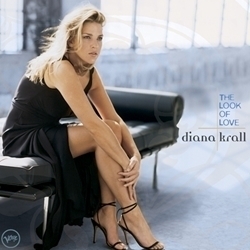 With her 2001 album The Look of Love, Diana Krall confirmed her exceptional status as a jazz singer. Her ballads and Bossa Novas are elegant and sensual. Besides the title song The Look of Love, especially her subtle piano playing towards the end of Besame Mucho is enchanting. However, the album's highlight comes with the first song, 'S Wonderful. The Look of Love is the fifth album by Diana Krall in a row that Tommy LiPuma produced. LiPuma is also known for his work with Barbra Streisand, Miles Davis, João Gilberto, Natalie Cole and Shirley Horn. Regarding Claus Ogerman, Diana Krall said that, together with Johnny Mandel, he has been her favorite arranger/composer since she was seventeen. Ogerman had an important role on albums recorded by Frank Sinatra, Barbra Streisand and Antonio Carlos Jobim. Ogerman also had been working for years together with LiPuma, for the first time on George Benson's outstanding album Breezin'. Since Claus Ogerman featuring Michael Brecker in 1990, the two had gone separate ways. But when Diana Krall was on tour in Munich, LiPuma arranged for her to have lunch with Ogerman. That is how the pianist/singer, the arranger/composer and the producer began to work on a common project: The Look of Love. On her 2001 album The Look Of Love, Diana Krall's voice sounds fuller, richer and softer than before. Her songs were arranged by Claus Ogerman who also conducts the London Symphony Orchestra. The Look of Love gives an impression of unity despite the fact that it contains material from a lot of different sources: e.g. Cry Me A River by Julie London, Love Letters by Nat King Cole and jazz-standards such as Dancing in the Dark by Arthur Schwartz (music)/Howard Dietz (text), I Remember You by Victor Scherzinger/John Mercer and 'S Wonderful by George and Ira Gershwin. Musicians: Diana Krall, piano & vocals Russell Malone, guitar Christian McBride, acoustic bass Peter Erskine, drums Jeff Hamilton, percussion Paulinho Da Costa, percussion Luis Conte, percussion Romero Lubambo, guitar John Pisano, acoustic guitar Dori Caymmi, acoustic guitar London Symphony Orchestra Los Angeles Session Orchestra Claus Ogerman, conductor
Side 1  1. S'Wonderful  2. Love Letters  3. I Remember You  Side 2 1. Cry Me A River  2. Besame Mucho  Side 3 1. The Night We Called It A Day 2. Dancing In The Dark 3. I Get Along Without You Very Well  Side 4 1. The Look Of Love  2. Maybe You'll Be There