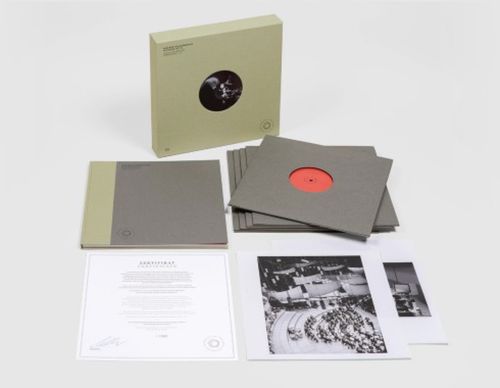 This is an expensive, but seriously well-done box set and while people can argue about what is the best Brahms cycle (some say its Claudio Abaddo’s with the Berlin Philharmonic), this is the only one done D2D and if eliminating the digits matters at all to you, here you go! And I hear you: “If you can’t tell which side is from tape, what’s the point of D2D”? Well I wasn’t listening for the tape, I was too busy enjoying the music, and that’s the main point. Isn’t it? The set is limited to 1833 copies, which is the year of Brahms's birth. Music 11/10 Sound 9/10 Michael Fremer analogplanet.com

Here the timbre is indeed true to life: the microphone response is ultra–flat in the midrange broadly conceived—and the sound comes across as extremely neutrally recorded. And the microphone response extends far into the ultra-sonic range, to beyond 50 kHz. This is a fascinating and wonderful recording. The price perhaps seems high, but for something this distinctive and this close to the live concert experience, the cost seems justified. The Absolute Sound

Direct to disc: this term represents the ultimate in analogue recording quality. With no intervention and without any post-processing, the sound is cut directly into a master disc at the moment of the performance – the basis for a vinyl release of unique tonal authenticity. This complex, end-to-end analogue process is rarely used in today's digital age. Now, it was used to document a performance cycle of all of Brahms’s symphonies by the Berliner Philharmoniker and Sir Simon Rattle, and the result is available in an exclusive and limited vinyl edition.

Since the orchestra was established in 1882, the Berliner Philharmoniker have had a special relationship with Johannes Brahms, who also conducted the orchestra himself. Performances of his symphonies have always been a focal point of each chief conductor’s term of office, including Sir Simon Rattle under whose direction the Berliner Philharmoniker have given performances and made recordings of this music whose exemplary status has been testified to. Consequently, it seemed only natural to use the direct to disc process for this performance of Brahms’s symphonies with the Berliner Philharmoniker. Another feature is the purist recording method, using just one single pair of stereo microphones. In this way, a sound was able to be captured that is extraordinarily close to the original acoustics of the Philharmonie.

The Brahms cycle in the direct to disc process is only on release in the Berliner Philharmoniker Recordings vinyl edition and not on any digital medium. Corresponding to Johannes Brahms’s year of birth, it is limited to 1833 copies worldwide. The edition, produced to a particularly high standard, and with a comprehensive accompanying book, is not only a collector’s item for every vinyl fan – it also embodies a milestone in the rich media history of the Berliner Philharmoniker.

Recorded live at the Berlin Philharmonie
in September 2014