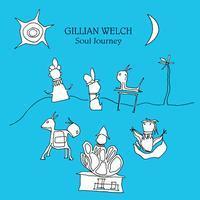 To my ears the recording is as perfect as the performances, so in my world this gets the rare 11 for music and sound. Maybe I'm wallowing. I guess I sure like to wallow! Nice gatefold packing, and "Tip on" jacket. A record you'll treasure.Sound 11/10 Music 11/10 Michael Fremer analogplanet
100 Recommended All-Analog ressues Worth Owning - Michael Fremer Analogplanet
Pressed at Quality Record Pressings!
Mastered from the original tapes through custom Ortofon amps to a Neumann VMS-80 cutting system
Deluxe Stoughton Printing gatefold jacket with complete lyrics
"There's no contemporary artist who performs American roots music with more authenticity than Welch." — Associated Press
"We have been working and waiting 20 years to bring you our music on phonograph record. It took a while, because we wanted to do it the right way, the absolute best way humanly possible, and I believe that's what we've done. No sonic stone was left unturned, no nuance let fall by the wayside. There is honestly nothing else I can imagine hoping to hear out of the original tapes. It is all there in the groove. As people whose lives were changed by the sound of music coming off turntables, we humbly invite you to include us in your record collection." — Gillian Welch
Gillian Welch's celebrated fourth studio album, 2003's Soul Journey, will be released for the first time ever on vinyl via her own Acony Records on August 10th, to coincide with the album's 15th anniversary. The long awaited first pressing of Soul Journey, which The A.V. Club hailed as "raw, spare, direct, and achingly pretty," contains some of her most beloved songs, including "Look At Miss Ohio," "Wayside/Back In Time" and "Wrecking Ball." Soul Journey was mastered directly from the original tapes through custom Ortofon amplifiers to a Neumann VMS-80 cutting system and plated and pressed on 150-gram audiophile-quality vinyl at Quality Record Pressings,
Gillian Welch and her musical partner David Rawlings have recorded eight studio albums and have lent their talents to countless fellow artists' recordings. Recently, Welch & Rawlings released their latest collaboration, David Rawlings's Poor David's Almanack, a wry mixture of acoustic and electric music rich in ageless American vernacular. The album of 10 new songs was engineered by studio wizards Ken Scott (Beatles, David Bowie) and Matt Andrews on analog tape during a week of sessions at legendary Woodland Sound Studios in Nashville, Tennessee. .
In recognition of their remarkable career, Welch and Rawlings were honored with the Americana Lifetime Achievement Award for Songwriting in 2015 and the Berklee American Masters Award in 2016.
Side 1
Look at Miss Ohio
Make Me A Pallet On Your Floor
Wayside / Back In Time
I Had A Real Good Mother And Father
One Monkey
Side 2
No One Knows My Name
Lowlands
One Little Song
I Made A Lovers Prayer
Wrecking Ball