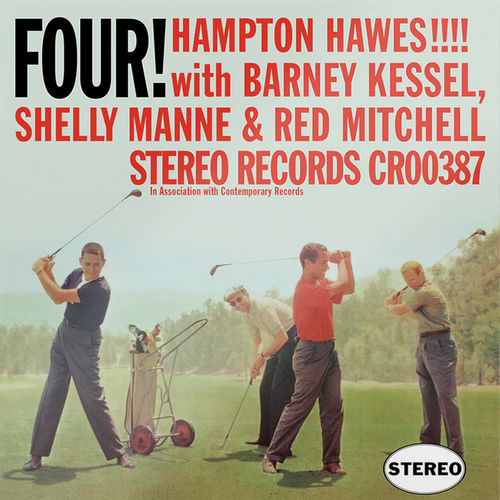 This new  reissue of Hampton Hawes’ Four! is really a no-brainer bargain for any vintage jazz fan to pick up. Grab one while you can.- Analogue Planet

originally engineered by Roy DuNann and/or Howard Holzer, features all-analog mastering from the original tapes by legendary engineer Bernie Grundman (himself a former employee of the label), as well as unsurpassed audiophile pressing on 180-gram vinyl at Quality Record Pressings, presented in a Stoughton Printing old-style tip-on jacket.

Guitarist Barney Kessel, drummer Shelly Manne, bassist Red Mitchell, and the supremely soulful Hampton Hawes, one of jazz's most appealing yet unsun pianists, fill out the quartet scorecard of the 1958 release Four!. Although much later in his career Hawes experimented with electronic keyboards and fusion music, at heart he was a bebopper, as this session makes abundantly clear.

With material like Charlie Parker's "Yardbird Suite," his own "Up Blues," and Red Mitchell's "Bow Jest" (on which Mitchell plays his first recorded bowed solo), Hawes is at a creative peak here. Kessel, who played on the date, paid tribute to Hawes' "inexhaustible ideas on the blues…no one else in modern jazz plays the blues better." And nobody could tie a rhythm section together better than Shelly Manne, the fourth party in this boundingly energetic Four!