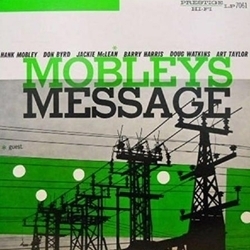 Hank Mobley's 1956 Prestige release Mobley's Message features six recordings from the legendary tenor saxophonist in three different settings including one cut with a quartet, four with a quintet and one with a sextet.
Players such as Donald Byrd (trumpet), Jackie McLean (alto sax), Barry Harris (piano), Doug Watkins (bass) and Art Taylor (drums) offer their support here in disparate incarnations.
Contains a quintet reading of Charlie Parker's "Au Privave" and a quartet take on the Rodgers & Hart standard "Little Girl Blue" with Mobley being the sole horn.

Many are familiar with the long-lined tenor offerings of Hank Mobley through his work with the Jazz Messengers. It was during his tenure with that group that he really came into his own. Prior to that he had been with several groups including Max Roach's intermittently during the 1951-3 period, Dizzy Gillespie's for most of 1954 and late in the year the Horace Silver group which grew into the Messengers.

Born in Eastman, Georgia in 1930, but raised in New Jersey, Hank made a small name for himself around the Newark area in the Garden State. After a stint with Paul Gayten's r&b band in 1950 he was formally introduced to a wider jazz audience with the Roach quartet. That he was following the Charlie Parker tradition was evident, and he had also been touched by Sonny Rollins. To these influences however, he brought a personal feeling and identifiable sound both of which have been further crystallized in the years that followed. The Parker lineage is still unmistakable but is more general than specific and the occasional references to Rollins are now no more than tips of the hat.

Hank's sound is a distinctive one which serves well the emotional content and rhythmic bent of his ideas. Its texture is more like a pulling in than a blowing out and once prompted Ira Gitler to write after hearing him at a club, "He sounded as if he was inhaling notes from the field between the microphone and the bell of his horn and transmitting them through the loudspeaker at our left by means of a magnetic reed."

Mobley's message is delivered in three different size envelopes. Four are by the quintet in which Hank is helped by telegrapher Donald Byrd and his "sending" trumpet. They disseminate the information of two dictums from bop's palmy days, Bud Powell's "Bouncin' With Bud" and Thelonious Monk's "52nd Street Theme" plus two more personal statements, Hank's "Minor Disturbance" and the group's "Alternating Current".

For Charlie Parker's blues, "Au Privave", the group becomes a sextet with the addition of the young herald of the alto sax, Jackie Mclean. Hank is the sole horn on "Little Girl Blues". Helping in all departments throughout are the everswinging duo of Art Taylor and Doug Watkins, joined here by another in the illustrious line of emigres from Detroit, pianist Barry Harris. Extremely reminiscent of the Bud Powell of a bygone decade but with a lighter touch, Barry shines, like the young star that he is, all over this record, thereby fully illuminating all messages. 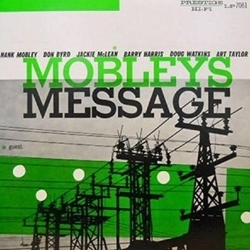