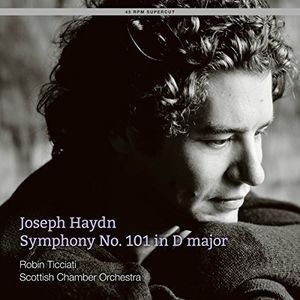 Haydn: Symphony No. 101 is the first LP featuring Robin Ticciati and the Scottish Chamber Orchestra's charismatic partnership. To make it extra special this is a 45 RPM Supercut, 180-gram vinyl which gives you everything you love about LPs but more: Better dynamics, less noise and a cleaner hi-fi response.

Giving a snapshot of Haydn's symphonic repertoire Ticciati conducts the first of Haydn's famous London Symphonies, The Clock, which has its focus firmly on the future. Ticciati's approach takes the best elements of authenticity present in period performances, but with the dynamic range, space, colour and life that modern performance practice brings.

Ticciati beautifully highlights the lines, clarity and shape of the music, a skill he brought to bear in his Schumann symphonies recording which garnered several five star reviews and accolades upon release. Haydn has occasionally been treated a little too tidily by orchestras, but these performances are alive and excitingly fresh.