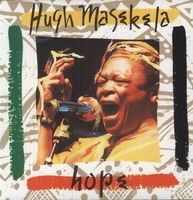 How sad, if timely: this stunning reissue of the 1994 live album arrived in the very week that trumpeter Masekela passed away. One of the most successful ambassadors ever for African music, his fusing of the continent's rhythms and instruments with contemporary jazz and rock proved irresistible. Nearly every one of you has heard him, thanks to guess spots with The Byrds and Paul Simon. His breakthough hit from 1968 — the infectious "Grazing In The Grass" — is here, along with another 11 tracks recorded at Blues Alley, the U.S. club that gave us Eva Cassidy. Notably, despite its early-1990s origins, this is all-analogue." — Sound Quality = 90% - Ken Kessler, HiFi News, May 2018

"…Hope is one of those intensely visceral, large as life, and immediately present recordings that will make pretty much any system sound at least very good, and will cause better ones to raise goose bumps." – Wayne Garcia, The Absolute Sound,

"A stunning demo disc to test or show off any stereo system." – Playback,

"Here's another masterpiece from Chad Kassem and Kevin Gray…you would swear that you are listening to a master tape in your living room…this one is great for showing off what your stereo system can do." – Jeff Dorgay, Tone Audio

"…Believe me, this makes the CD sound like digital dog crap. It you thought the CD version sounded good, you ain't heard nuttin' yet." - Michael Fremer,

A  longtime audiophile demonstration disc, "Hope" will show off your system's dynamic range as well as any record ever released. Hugh Masekela, the outstanding South African trumpeter, assembled a seven-piece group and recorded this great set live at Washington, D.C.'s Blues Alley. The songs stretch over a period of nearly five decades and serve as an informal guided tour of Masekela's life. The songs are honest and bare, and as for the sound – WOW! "Horns are brilliant, rich and brassy-bright; drums have the kind of punch-to-the-gut power they have up-close, the soundstage is huge, and on "Grazzin' in th Grass," the sound has the kind of blowback power seen in old Memorex ads." - Wayne Garcia, TAS August 2008  :This was a live show by Masekela and his band recorded at Washington D.C.’s Blues Alley back in l993, and first released on standard CD in 2004. The high quality original mix plus Analogue Productions’ superb mastering has resulted in a terrific , very transparent sonic with great impact.

This was the first time Masekela was playing with an all-African band in about 30 years. Each of the dozen tracks has detailed notes by Masekela. Five of them are by Masekela and the rest primarily songs from various African cultures.  The languages are Zulu, Sotho, Shangaan, and Pidgin English. The first track is a song by Miriam Makeba which translates as The Healers, and was inspired by her mother who was a native healer. The song Mandela (Bring Him Back Home) is self-explanatory. But it’s not all vocals – there’s some great trumpet and Flugelhorn solos from Masekela as well as his reed man. The most familiar tune here will probably be his big pop hit Grazin’ in the Grass. The gorgeous Love Bird is an instrumental and the most requested song in South Africa. The last of the tracks is a ten-minute Masekela original, Stimela (The Coal Train). It begins with a moving narration about the terrible feelings the miners working near Johannesburg had when they heard the whistle of the coal train which had brought them from their various settlements to a miserable and dangerous life underground in the mines.

Not only is the music of the highest quality, the musicianship peerless but the sound quality, particularly for a live environment is equally stunning. The realism, space and depth is astounding, the detail wonderful. We are blessed that such an excellent engineer was on hand that night to capture the performance. And that Analogue productions elected to put this out on the 45rpm dbl lp set that we have here. You can't get better sound than this and you really should snap this up before it is gone. 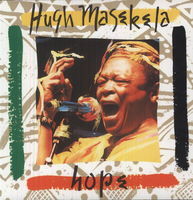