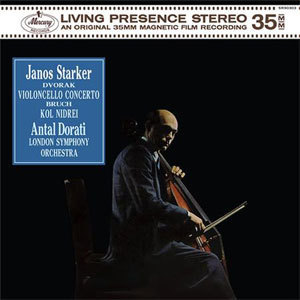 This new 45 RPM remastered reissue by Tom Fine and Ryan Smith might just be the first analog reissue that is hands down better than the original (and my original is a minty RFR P17 US cleaned before playing). No ifs, ands or buts. No excuses needed. ... Tom Fine and Ryan Smith turned to the original backup 1/2-inch master tape for this release. No detail was too small and Tom and Ryan had to cut several lacquers until they achieved the desired quietness. ... Dorati and the LSO have never sounded better. While the Dvorak captures everyone's attention, it's perhaps the performance of Bruch's Kol Nidrei that is the hidden gem on this recording. The low end, extension and the sound of Starker's cello is off the charts. Starker's cello is revealed like never before on this reissue; the detail, tone and solidity of his cello is stunning. ... Highly recommended!" — Myles r editor, Positive-Feedback.

Starker tackles this cello concerto with amazing confidence; technical difficulties encountered by others in its performance appear unknown to him. Tonal purity, even in the dreaded upper register and the cadenzas, remains unscathed, so that one can concentrate wholly on the meditative magic of the music. Starker certainly found worthy fellow musicians in Dorati and the LSO. The conductor and soloist set a benchmark in how to work together as a team in concert in that it is less the often-lamented emulation than the interpretation, which stands in the foreground in this performance. Rather, the two protagonists commit themselves to a chamber-music-like reading, which is distinguished by the dynamically moderate intonation of the orchestra and the slender tone of the soloist throughout.

An ever-welcome encore is found on side two with Bruch's Kol Nidrei, performed with verve and a good portion of romantic, melting sweetness, which allows this evergreen to truly flourish. 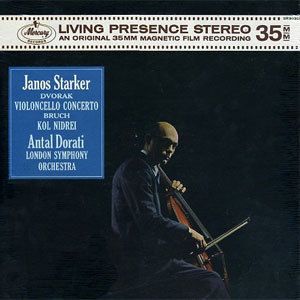