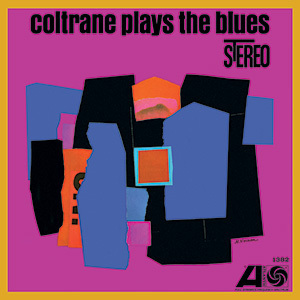 John Coltrane returns to his roots using the Blues to explore the boundaries of Jazz! Features McCoy Tyner, Steve Davis and Elvin Jones! Recorded in 1960 during the My Favorite Things sessions, Coltrane Plays The Blues features "Blues To Bechet," "Blues To Elvin" and "Blues To You" in addition to three other tracks.

"Coltrane's sessions for Atlantic in late October 1960 were prolific, yielding the material for My Favorite Things, Coltrane Plays the Blues, and Coltrane's Sound. My Favorite Things was destined to be the most remembered and influential of these, and while Coltrane Plays the Blues is not as renowned or daring in material, it is still a powerful session. As for the phrase "plays the blues" in the title, that's not an indicator that the tunes are conventional blues (they aren't). It's more indicative of a bluesy sensibility, whether he is playing muscular saxophone or, on "Blues to Bechet" and "Mr. Syms," the more unusual sounding (at the time) soprano sax. Elvin Jones, who hadn't been in Coltrane's band long, really busts out on the quicker numbers, such as "Blues to You" and "Mr. Day." - Richie Unterberger, www.allmusic.com

"The Coltrane Quartet, three-fourths complete at the time of this recording, had begun its historic rise and had also turned the corner in Coltrane's music, transitioning from the expressive verticality of Giant Steps to the more elongated, long-limbed lyricism that would define his role in the avant-garde. It can come as no surprise that to do so, he engaged the material he'd known longest and best - the blues." - Neil Tesser, author of The Playboy Guide To Jazz

• Mastered by Bernie Grundman from the Original Analog Master Tapes!