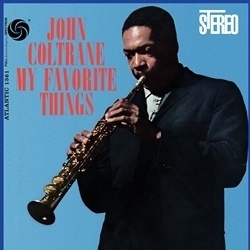 Though many of Atlantic’s master tapes were lost in a warehouse fire, ORG Music was able to use the masters of My Favorite Things . The live-in-the-studio sound captured here would be scrubbed away if these were mere safety tapes. If this attention to detail is what ORG Music has for all of its releases, then we have yet another reissue label to keep a close eye on. They've taken a jazz classic and given it new life, to become a must-own recording all over again.- theAudiobeat

Instantly recognized and forever celebrated, My Favorite Things is a landmark recording in every possible sense. The 1960 album is the first that introduced John Coltrane's legendary quartet with pianist McCoy Tyner, bassist Steve Davis, and drummer Elvin Jones. It is also the first on which he played soprano saxophone. And it absolutely reimagined how a popular song (the smash title track) could be interpreted and spun into a completely new, absorbingly beautiful piece of art.

Initially, the idea behind My Favorite Things was to have Coltrane record a set of standards that would be welcomed by the populace and marketplace. The genesis was Coltrane's preceding The Avant-Garde album, which, true to its title, found the leader exploring angular works. However, Coltrane didn't settle for a typical approach here, as his radical redoing of the title track features a scalar technique, a hybrid of Western and Eastern themes, advanced chord structures and yet, recognizable shapes and controlled melodies throughout.

It remains a marvel of modern music, its freshness immune to age. The remainder of the album is equally splendid, with Coltrane riffing on two George Gershwin tunes and displaying a trademark coolness that defined his work for Atlantic. His mates are sympathetic to the cause, the band's chemistry simply superb.  This is truly a record that no music lover should be without.

1998 Grammy Hall of Fame inductee   "This 1960 recording was a landmark album in John Coltrane's career, the first to introduce his quartet with himself, pianist McCoy Tyner, bassist Steve Davis and drummer Elvin Jones, and the first release on which he played soprano saxophone. It also provided him with a signature hit, as his new group conception came together wonderfully on the title track. It's an extended modal reworking in 6/4 time that brought the hypnotic pulsating quality of Indian music into jazz for the first time, with Coltrane's soprano wailing over the oscillating piano chords and pulsing drums. The unusual up-tempo version of Gershwin's 'Summertime'is a heated example of Coltrane's 'sheets of sound' approach to conventional changes, while 'But Not for Me' receives a radical harmonic makeover.

1. My Favorite Things
2. Everytime We Say Goodbye
3. Summertime
4. But Not For Me 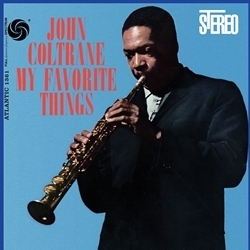