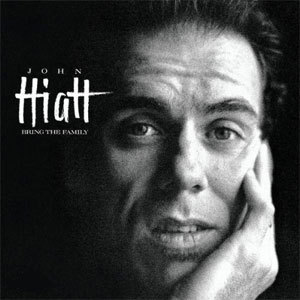 2014 Stereophile Magazine Record to Die For!

Often called 'the best album in John Hiatt's career', Bring The Family (1987) was recorded in just four days by Hiatt's dream line up: Ry Cooder on guitar, Nick Lowe on bass and Jim Keltner on drums. Having just come out of a period of personal turmoil, Bring The Family was an important record for Hiatt on a personal level. His lyrics show that he has wised up, and tells wonderful stories about love, life, and the heavens where both might take you. The excitement of working together with his favourite musicians in the game surfaces in a sizzling spontaneity in the grooves these guys lay down. The album spawned the single "Thank You Girl" that fared well on the Mainstream Rock charts. Further highlights on the album are "Memphis In The Meantime", "Thing Called Love" and "Have A Little Faith In Me" (the one and only Hiatt original, also later interpreted by stars like Joe Cocker and Bon Jovi). A few years later, Hiatt repeated the trick with the same musicians but under the Little Village moniker.

"Hiatt and his dream band went into an L.A. studio and knocked off Bring the Family in a mere four days, and the result was the best album of Hiatt's career. The musicians certainly make a difference here, generating a lean, smoky groove that's soulful and satisfying (Ry Cooder's guitar work is especially impressive, leaving no doubt of his singular gifts without ever overstepping its boundaries), but the real triumph here is Hiatt's songwriting. Bring the Family was recorded after a period of great personal turmoil for him, and for the most part the archly witty phrasemaker of his earlier albums was replaced by an wiser and more cautious writer who had a great deal to say about where life and love can take you... But Bring the Family isn't an album about tragedy, it's about responsibility and belatedly growing up, and it's appropriate that it was a band of seasoned veterans with their own stories to tell about life who helped Hiatt bring it across; it's a rich and satisfying slice of grown-up rock & roll." - Mark Deming, allmusic.com, Rated 4.5/5

"Bring the Family is one of the most sublime and deeply felt albums of the Eighties." - Rolling Stone

"Bring the Family is certainly Hiatt's most inviting work ever... Hiatt steps forward as himself on Bring the Family, and it's a revealing show. Listening to this record is like being dropped from a great height into a swimming pool full of ice cubes--its honesty is that startling. The album is a great bellow from the heart, full of songs that are captivatingly frank and invariably touching... To say merely that Bring the Family is John Hiatt's best album is underselling it. Let me put it this way: I'll be listening to this poignant, heartbreaking, thrilling record for as long as I'll be listening to Blood on the Tracks. That's the kind of company it deserves to keep on the shelf." - Chris Morris, Chicago Reader