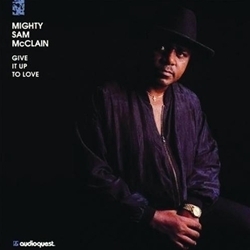 ON BACK ORDER / WAITING A REPRESS

Mastered by  Kevin Gray at Acoustech  from the original analog tapes

"Give It Up To Love is the R&B comeback of the year." — Rolling Stone

"Mighty Sam McClain's Give It Up To Love is one of the great soul records." — Stereophile

Mighty Sam McClain is a rhythm and blues legend who shook up the blues world with his first release for AudioQuest Music, 1993's Give It Up To Love. Called "The great torch bearer of deep soul," by Rolling Stone, McClain is captured in absolute top form on this classic album which received every possible accolade including Pulse! Magazine's Blues Album of the Year for 1993.
The thrilling set finds Mighty Sam accompanied by Bruce Katz (piano, Hammond B-3 organ), Kevin Barry (guitar), Michael Rivard (bass), Lorne Entress (drums) and Bennie Wallace (tenor saxophone).
And now Analogue Productions is offering Mighty Sam McClain's masterwork on a superior sounding 200g vinyl edition mastered from the original analog tapes by Kevin Gray and pressed at Quality Record Pressings. Housed in a old-school gatefold jacket - thick cardboard, tip-on, with additional photos and liner notes.

"McClain sings soul with incredible power - he knows when to pull the punches and when to cool it down. 'Give It Up to Love,' the title track, acknowledges his gospel roots; he performs it as a vocal prayer to God asking for wisdom, love, and strength. Bruce Katz's contributions on B-3 Hammond organ expands McClain's sound, particularly on the 'Green Onions'-influenced 'What You Want Me to Do.' The sparsely effective arrangement on 'Here I Go Falling in loveagain.' brings McClain up front as he cries of being a soul stripped to the bare bones. Kevin Barry's funky bass blows while McClain declares himself as a child of God in 'Child of the Mighty Mighty.'" - Analogue Productions / AMG

"Mighty Sam McClain's Give It Up To Love is one of the great soul records." - Stereophile
this  pure analogue recording with the tracks recorded live, direct to two track, with no more than a couple of takes for each song, and the negligible use of overdubbing.  This gives the album a live-in-the-studio feel. On the track, “Got To Have Your Love”, the drums come in, followed by the saxophone and bass, followed by a guitar riff and a short piano solo.  Then before he starts to sing you can hear a big belly laugh coming from McClain in the background as he enjoys the quality of the musicianship around him.  In fact from the first few notes of the upbeat opening track, “Give It Up To Love”, with the drums, Hammond organ, electric guitar and electric bass supporting the soaring vocals, to the last notes of the closing track, “Lonesome Road”, which is a vocal and acoustic guitar duet, this album is a delight.  It is a rare mixture of great musicianship, great music and a great recording.
Musicians:
- Mighty Sam McClain (vocals)
- Bruce Katz (piano, Hammond B-3 organ)
- Kevin Barry (guitar)
- Michael Rivard (bass)
- Lorne Entress (drums)
- Bennie Wallace (tenor saxophone)

Mighty Sam McClain Give It Up To Love 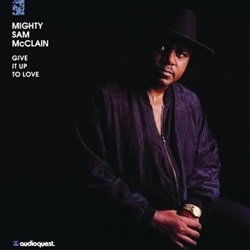