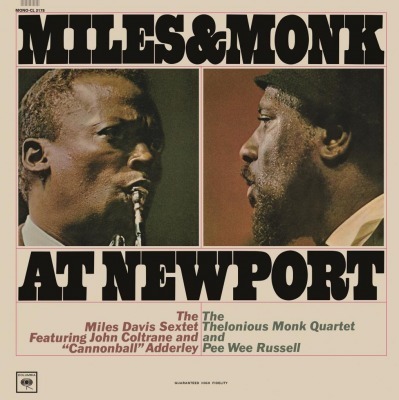 Classic live recordings from jazz masters Miles Davis andThelonious Monk on one LP. Side One is high energy bebop from the Miles Davis Sextet in 1958 and Side Two includes two full numbers from the Thelonious Monk Quartet with Pee Wee Russell from 1963.

At the time of this album's original release (as Miles & Monk at Newport), Thelonious Monk was really hitting his stride as a jazz star and was then, like Miles Davis, signed to Columbia. Critics usually damn Monk's '60s groups with faint praise, but listen to the fiery interplay Davis and Monk bring to his splintery rhythmic displacements on "Criss-Cross," and their dancing joy on "Epistrophy." "Light Blue" is one of Monk's harmonically free-ranging little blues, taken at such an expressively slow tempo, his chords take on a symphonic breadth behind Charlie Rouse's endless lyric elisions. But the main attraction of this concert was the cross-generational accord between Monk and clarinetist Pee Wee Russell, who sits in on Monk's famous blues "Nutty" and "Blue Monk." Closer to the Dixieland school than bop, Russell nevertheless responds brilliantly to Monk's urgent abstract Charleston on "Nutty," and when the pianist drops out to let him stroll, he responds with a wink and some knowing dissonances. "Blue Monk" is even better, as Russell's wistful, teardrop timbre inspires insistent counterpoint from Monk, and his tonal abstractions lead perfectly into Monk's solo -- proving that styles don't clash, only people. Miles' 1958 set begins with a brisk, aggressive romp, as the sextet charge through Bird's contrapuntal line "Ah-Leu-Cha," then settle into a deep, deep groove on their famous arrangement of Monk's "Straight, No Chaser." Listen to the way Bill Evans, Paul Chambers, and Jimmy Cobb deconstruct the time and harmony behind Miles' spacious intervals, only to lock up and fly in the second chorus. John Coltrane really whips it up here (and on a blazing "Two Bass Hit"), his ideas crowded together like blood corpuscles lining up to pass through a single capillary. Inspired by Coltrane's complexity (and Cobb's power), Cannonball Adderley responds with a contrasting gospel blues feel, while Evans offers a coy, bluesy transition to Chambers' resounding dance.