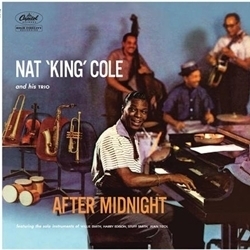 'Records to Die For' in Stereophile by Michael Fremer's

"...this is one of my favorite record purchases in a long time. Close to perfection in many areas, I consider it one of the MOST TRANSPARENT AND DYNAMIC TAPE TO VINYL TRANSFERS I'VE EVER HEARD. TOP 5 ALL TIME JAZZ/CROONER RECORDING FOR MUSIC AND SOUND." - soundevaluations,

"The set was mastered from the original full track, superb sounding mono tape. If you need convincing about the greatness of mono recordings, try this explosive set! The power and presence of the instruments and Cole's voice will throw you back in your chair as will the three-dimensionality of the single track presentation... Highly Recommended!" - Michael Fremer,.musicangle. Music 9/10, Sound 10/10

The incredibly perfect blending of Nat King Cole's supreme talents as jazz pianist/vocalist with small combos featuring fellow jazz alumni and commercial pop and jazz material proved to be wildly successful with this 1956 release. After Midnight firmly displays the depth of Cole's jazz roots and it maintains the perfect balance between romantic charm and musical invention. The last full-length jazz record Cole would release, it includes contributions from guitarist John Collins, trumpeter Harry "Sweets" Edison, violinist Stuff Smith, and valve trombonist Juan Tizol. In addition to the full original album, five additional tracks and one alternate take from the original sessions are included in Analogue Productions' splendid LP release. Mellow, classy, focused and vibrant, After Midnight was a hit and an instant classic upon its release in 1956 and remains a gem to treasure today. Never before has this record sounded so rich, with every detail and nuance restored in a manner that places you in the recording studio with Cole.

Mastered fully analog from the original first-generation full-track monaural session tapes by Steve Hoffman and Kevin Gray to 45-RPM 180-gram vinyl, this exemplary recording is presented in appropriately exquisite sound quality as you've never experienced before. In addition, this superb reissue comes with a stunning  six-panel booklet complete with rare photos, a 4,600-word essay by Chris Hall on the album, and a 1,200-word essay by Michael Fremer about the remastering process.

Be certain to order this historical release as well Analogue Productions' other must-have Cole 180g 45RPM LP reissues! "Cole's voice is up front, and the accompaniment, especially the massed strings, has a colorful vividness. After Midnight was recorded in mono, and it is among the very best 1.0-channel reissues. Played with a mono cartridge, it displays intimacy and tonal purity that must be heard to be believed. Recordings this revealing offer new ways of evaluating everything about the recording sessions." - Marc Mickelson/The Audio Beat 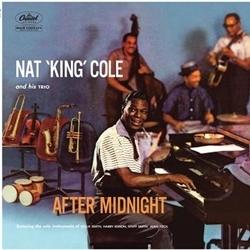