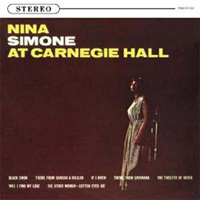 "Based upon the diversity of music, quality of product and their extraordinary rate of progress, Pure Pleasure Records is our re-issue record company of the year."  - hi-fi+

This 180g reissue is a live album recorded in 1963 at Carnegie Hall. Singer/pianist/songwriter Nina Simone performs seven songs including "Black Swan", "Will I Find My Love Today" and the instrumental "Theme from Sayonara". Pianist and singer Nina Simone defied categorization by blending classical, jazz and popular music into an unconventional and highly personal idiom. Over four decades, she galvanized audiences with albums and performances replete with deep passion and keen attention to emotion.  Fiercely honest, Simone was admired for her eccentricity and individualism. She was known for her spirited personality on and off the stage and  voicing her opinions about social topics of the time.

The legacy of Simone's music and message can be heard not only in jazz but amongst the many pop artists who cite her influence. Several of Simone's songs have become jazz standards, and her voice is even familiar to audiences who don't know her name through their frequent use in movie soundtracks and commercials.

In 1963, Nina was adamant about making a solo appearance at Carnegie Hall in fulfillment of her childhood dream as the first black female classical pianist. None of the concert promoters would undertake such a presentation because they did not believe she could carry off a solo concert. Therefore, when I resigned from the NYPD [New York Police Department], I took my pension rebate and, on the advice of experts in the music industry, hired Felix Gerstman, New York City's premier concertmaster, to manage the presentation • Re-mastering by Sean Magee at Abbey Road Studios Musicians: Nina Simone, piano & vocal Alvin Schackman, guitar Phil Orlando, guitar Lisle Ackinson, bass Montego Joe, drums  Selections:
Side One:
1. Black Swan (From "The Medium") 2. Theme From Samson And Delilah 3. If You Knew 4. Theme From Sayonara Side Two:
1. The Twelfth Of Never 2. Will I Find My Love Today 3. The Other Woman / Cotton Eyed Joe Recorded May 12, 1963 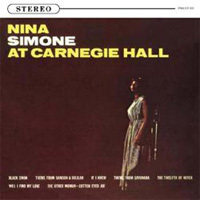