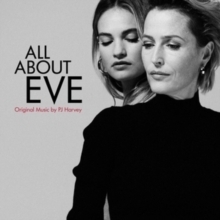 All About Eve - Original Soundtrack, composed by PJ Harvey on 18th October. The 12-track album will be released on  LP and contains 10 original pieces of instrumental music as well as two new songs written by Harvey and sung by Gillian Anderson and Lily James. The physical release also includes demo versions of 'The Sandman' and The Moth', performed by PJ Harvey. Harvey's score for All About Eve, is performed by herself, James Johnston and Ken rick Rowe, and uses Franz Liszt's 'Liebesträume' (a musical element of Joseph L. Mankiewicz's original 1950s classic film) as a musical touchstone, exploring the more somber and deeply psychological aspects of the story. The album is produced by PJ Harvey, with additional production and mixing from Adam 'Cecil' Bartlett.

For All About Eve I chose to work with my long-time collaborator James Johnston as he has a soulfulness and sensitivity to his playing that inspires me. I also worked with Kenrick Rowe who has a versatility to his drumming I knew I could experiment with until I found what was right.”