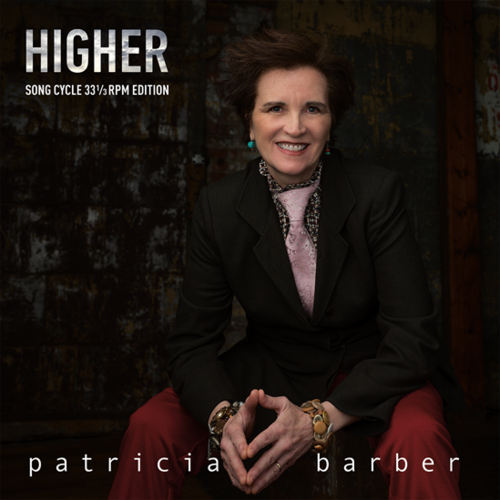 Impex Records is excited to announce our premier collaboration with one of our generation’s most influential jazz artists, Patricia Barber. Her elegant new album Higher, recorded and mixed by long-time collaborator jim Anderson, contains eight songs that explore the mysteries that bind us, causing Jazz times declare: “Few performers in or out of jazz are as consistently brilliant as Patricia Barber. ...Brainy.

Beautiful.” We are presenting a one-time pressing of HIGHER: Song Cycle edition for her 2019-20 European Tour

Higher is the new studio album by composer, singer and pianist Patricia Barber. Inspired by classical works and the challenge of making jazz music more expansive, the latest project came to life. And again Barber knows how to create a more artistic side of modern jazz, without denying the traditional roots of American jazz music.

It has been six years since Patricia Barber's latest studio album was released. Smash continued on the path Barber took with Mythologies (2006), by weaving influences of classical music with literature or poetry into an eclectic jazzy work with depth. Barber once promised herself to delve into classical works when she reached the age of 50 and did so. In recent years, the expressionist-minded artist has increasingly immersed herself in the many forms of classical music and, thanks to a friend's remark, felt challenged to prove that jazz, like classical music, could contain short songs. Just like works by Schumann or Schubert.

The challenge that Patricia Barber had set for herself was a big one. Not because it proves the above view, but simply because Barber is rather purist, and perfectionism suits her whole being. That resulted in years of composing, testing and looking for inspiration to give shape to her project. It was probably the acquired knowledge of her work together with Kenny Werner in combination with her collaborations with the celebrated opera singer Renée Fleming and her own investigations that led to the song cycle that plays the leading role on Higher.

Patricia Barber christened the song cycle “Angels, Birds and I…,” written to be performed by classically oriented artists and suitable for improvisation by jazz musicians, with the song “Higher,” written for her mother, as a central piece in the classically oriented jazz.album, the album delivers a sea of serenity and crystallized works, sometimes full of emotion and then full of hope or even humor. Yes, from a textual and musical point of view, Higher is a poetic gem that far surpasses Barber's previous works. And that is remarkable for an artist who has set the bar extremely high for herself for three decades.

The harmonic evolution, as Barber calls the path chosen, is a song cycle of eight tracks, which are "just for pure fun" supplemented with three variations on tunes from the Great American Songbook. The cycle is described contextually by a single protagonist, who, speaking from the role of the artist, empathizes with the inability to deliver works of the highest quality on stage (“Muse”) or receives the means for doing so (“Voyager”), aspires to a future in opera (“The Opera Song”) or ponders the pure love of music (“Surrender”).

The distance between human (artists) and the realm of the gods is often reflected in the songs, which combine musical harmony with contemporary jazz in a unique way. Really beautiful is the addition of the saxophone (as usual on her albums fabulously played by Jim Gailloreto) to the winter song “Pallid Angel.” Accompanied by her regular collaborators, Patrick Mulcahy on bass, John Deitemyer on drums, and Neal Alger on acoustic guitar, Barber explores and mixes colors and seasons with objects and emotion. A special mention is needed for the track “The Albatross Song,” where Barber and her band members tell a bluesy story, led by the bass in 5/4 time, of a woman who leaves her boorish capitalist husband for a new, distant relationship with the almost mythical bird--surreal and beautifully interpreted at the same time. - ERIC DE BOER