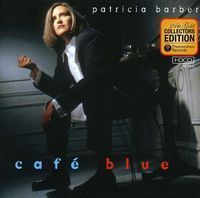 Long been regarded as a sonic masterpiece. It is a compelling reason to revisit this work with fresh ears."This album hooked me when I first heard Barber's cover of Miles avis's Nardis," through Dynaudio's loudspeaker exhibit at the 2010 Consumer Electronics Show. This track combines remarkable dynamic range with startlingly natural reproduction of the original acoustic. In his liner note, former Stereophile contributing editor Chip Stern writes, "the musicians play as much with the sound of the room as they do with each other, letting notes ring in the ether, relishing the decay, and bathing in glow of an exceptionally resonant acoustic space before raising the emotional stakes to a fever pitch." I also love Barber's own "Too Rich for My Blood," which mixes her wry blues lyrics with Michael Arnopol's driving bass line, and ends with an explosive drum solo by Michael Walker. Recording engineer Jim Anderson used an analog acoustic chamber for the reverberation, which in part accounts for this recording's remarkable ambience
— Stereophile

When Skinas says "It’s unlike any other version of Café Blue released to date," he’s not kidding. There is no sonic aspect of this SACD that is not an improvement over any previous release. If Café Blue is a favorite of yours, you have to hear what improvements have been made here. While a good mastering engineer can work sonic wonders, sometimes it takes someone with the guts to take a more hands-off approach to allow the recording to truly bloom. I passed on Skinas's thoughts to a friend of mine who is a mastering engineer, and he basically agreed that the better the recording, the less the mastering engineer has to do to produce great sound. Gus Skinas and the folks at Premonition Records have shown what’s possible by allowing a great recording engineer’s efforts to speak for themselves and helping to knock down our preconceptions of what’s necessary for a great recording to sound its best. Bravo! Sound 5/5 The Audio Beat

"The one thing that struck me the most about Premonition Records' latest release of an 'Un-Mastered' edition of the Patricia Barber jazz standard, Cafe Blue, was the audibly more reverberating recording studio ambience. ... After an ensuing decade of numerous reissues and LP pressings, Premonition Records hired Gus Skinas, Director of the Super Audio Center, a mastering and disc manufacturing facility of the SACD format, in a restoration of the Cafe Blue to the original studio mix prior to its commercial one. The result was a much quieter recording busting with dynamic contrasts. ... The Cafe Blue Un-Mastered is now the reference." — dagogo.com..

"Unlike any other version thus far released. You feel the character of Capitol's vintage Neve console and you hear all the detail and feel and space of those famous analog reverb chambers." — Gus Skinas, The Super Audio Center / This recording authored for Hybrid SACD by Gus Skinas at the Super Audio Center, Boulder, Colo.

For the first time, listeners will be able to hear the mixes as they were done in the studio and not in the mastered-for-release form of all prior  releases. This is the closest audio fans will get to the studio mixes  - Capitol Studios remix from 2011 - and it is a remarkable experience. Gus Skinas, of the Super Audio Center, has this to say about the SACD: “On this café blue, un-mastered and in DSD, you feel the character of Capitol’s custom Neve board and you hear all the detail and feel the space of
those famous analog reverb chambers.” For Mike Friedman, President of Premonition Records, the question of whether or not to
release café blue un-­‐mastered was a conundrum. “Every mastering engineer we’ve ever used on this recording did brilliant work. But I’ve always been aware of the quality of Jim Anderson’s studio mixes. In the end, I thought it worthwhile to let fans of
this recording hear what I heard. I think it will only serve to broaden their appreciation of Jim, Patricia and the great musicians heard on Café Blue

Cafe Blue is Back! Remixed from the Original Master Tapes at by Jim Anderson at Capitol Studios

"A dramatic improvement of what has long been regarded a sonic masterpiece. It is a compelling reason to revisit this work with fresh ears." - Thomas Conrad, Jazz Times, Stereophile

barber's first for Premonition, this one introduced her powerful quartet of the time featuring John McLean on guitar and Mark Walker on drums.

This might be the classic Barber album in that it blends pop covers, jazz standards, and original material in a thoroughly unique and interesting way.

That was not the norm in 1994 as it would be years later. This one also features Barber's first attempt at setting poetry to music with "Mourning Grace," a haunting Maya Angelou work. --

"The artistry of Patricia Barber is tied to the superlative technology of this vinyl pressing. Re-mixed at Capitol Records with a Neve 8068 console, EMT plates and a live reverberation chamber, the texture of the sound quality is rich. Barber’s alto is captured vibrantly in its broad depth and soaring upper register. The echoes and fades of the guitar are robust, and the precision of the drums (cymbals, sticks) and percussion (bongo, handclap) is exceptional. There is fluidity in all of the bass tones. Sparse arrangements sound full and multi-dimensional. The HQ-180 pressing is pristine without any pops or hisses. Gatefold jackets and high-gloss packaging add to the luster. The liner notes describe the re-mastering process from engineer, Jim Anderson (who worked on the original recording) and others. Café Blue on audiophile vinyl is as dazzling as SACD or 45rpm analog technology." - Audiophile Audition

I'm here to say that Gus and Premonition Records have smashed a grand slam on this one. This is flat-out and bar-none the best version of Café Blue that I've heard. Exceptional detail, and a wonderful sense of space, with the sultry and melancholy lusciousness of Barber's voice shimmering. Whether or not you own an earlier version, I strongly recommend that you add this SACD to your library of recordings - Positive Feedback 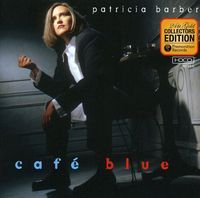