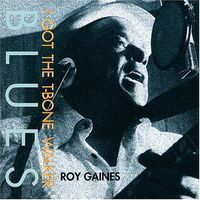 Phenomenal Sound!   A Must Have Blues Album!

Shines plays 11 classic Mississippi Delta blues tunes and turns in one of the masterpieces of the genre. The recording is both intimate and raw. Remastered by Ray Staff of Air Studios, the reissue hues close to the sound of an early original. This is a treasure not to be missed. - Sound 5/5 theAudiobeat

A Tribute to the Music and Spirit of T-Bone Walker - Roy's Earliest Mentor! Roy Gaines is the greatest living blues guitarist that you probably don’t know anything about. Not only is Mr. Gaines a sizzling blues guitarist, he also possesses one of the most magnificent blues voices around. The real tragedy is that until very recently this supremely talented musician was almost forgotten by blues fans in the U.S.

Born in Houston in 1937, Roy started playing the guitar as a teenager and soon developed a reputation as an instrumental prodigy. By fourteen, he was actually being invited on stage to play with the legendary T-Bone Walker during the latter’s live gigs in Houston and became known as T-Bone Jr. By his early 20s, Roy was playing and recording with Roy Milton’s band in LA but returned to Houston to join the Duke / Peacock blues label as a full time session guitarist on such seminal blues recordings as Bobby Bland’s It’s My Life Baby and Junior Parker’s Driving Me Mad.

He was also the featured guitarist on a whole bunch of singles recorded by Big Mama Thorton for the same label. After going on the road with Joe Turner, Roy joined forces with the blues great, Chuck Willis. Roy stayed with Willis until the latter passed away in the late 50’s. He then moved to NYC and recorded with Jimmy Rushing, as well as doing a jazz album with Coleman Hawkins on Prestige. Roy returned to LA and during the 60s became one of the city’s leading session guitarists, playing with the Crusaders, Earl Grant, Ray Charles, Aretha Franklin, Stevie Wonder as well as continuing his pure blues work with the likes of Bobby Bland, Albert King and Lightning Hopkins for the Jewel label.

The focus of this album is on the music and spirit of the late and very great T-Bone Walker, Roy’s earliest mentor and inspiration as a guitar player. T-Bone’s body of work includes such timeless blues standards as Stormy Monday, Dreamgirl, West Side Baby, T-Bone Blues and I’m in An Awful Mood and many others. This album focuses on the classic tunes and styles from the period of the 40s and 50s. Produced by Joe Harley and recorded at Ocean Way Studios in Sherman Oaks, CA. by engineer Mike Ross.

All mastering was done from the original master tapes by Bernie Grundman.

All LPs are plated and pressed by RTI, CA. Winner of the 1998 "Blues Comeback Artist of the Year" award by the monthly blues magazine Living Blues. The award is based on a poll of blues critics conducted by Living Blues, which is one of the main blues magazines in the USA. The Comeback Artist of the Year honor is awarded to the most significant bluesman to rebound onto the scene in 1998. "A modern blues masterpiece!"

Houston-born Roy Gaines pays a stirring tribute to one of his long-time heroes on I Got the T-Bone Walker Blues (Groove Note 1002-2; 53:14). Of course, Walker was hugely influenced B.B. King, as you can plainly hear on his early Kent sides. But Gaines, who once shared the stage with his idol at the age of 14, may be the greatest living T-Bone interpreter. He really conveys the spirit of Texas shuffles, slow blues and Lone Star State bravado on this excellent disc. A player of power and polish and a singer of great passion, Gaines does his mentor proud on these eleven tracks (including both electric and acoustic versions of T-Bone's most famous hit, "Stormy Monday"). And, like King on his Louis Jordan tribute, Gaines is similarly aided by some fine backing from some seasoned, soulful sidemen. Highly recommended.