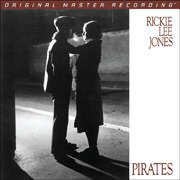 "Mobile Fidelity’s ultra-pure playback chain is the ideal conduit for this precise production and the resulting LP  both opulent and lush sounding without sacrificing transient speed and inner detail." - Michael Fremer

“Albums with this kind of stylistic magnitude, close-up intimacy, and emotional intensity come around only once or so a decade. Remastered from the original analog master tapes, MoFi’s limited-edition LP captures every nuance of this great-sounding studio masterpiece.

Rickie Lee Jones' gorgeous-sounding 1981 album finally remastered! "Rickie Lee Jones' Pirates arrives like a cloudburst in the desert of Eighties formula pop music and recycled heavy-metal rock.” So wrote Stephen Holden in Rolling Stone in his five-star review of the eclectic artist’s sophomore album, a set that continues to defy eras and styles. While less-well known than her 1979 self-titled debut, the ambitious 1981 record remains Jones’ definitive statement — an effort steeped in biographical details, fictional circumstances, and classic literary elements. Narratively blending West Side Story and Romeo and Juliet while also exploring spirit worlds and her breakup with Tom Waits, Pirates is at its core an idiosyncratic fusion of possibilities. And does Jones deliver! Accompanied by an all-star lineup that includes trumpeter Randy Brecker, Steely Dan icon Donald Fagen, drumming colossus Steve Gadd, session pro Victor Feldman, and legendary jazz arranger Ralph Burns, the singer-songwriter achieves a musical nirvana that encompasses post-bop, coffeehouse folk, bohemian pop, romantic soul, Beat poetry, and Broadway showtunes. Harmonized vocals and jive talking bring the piano-based record’s rich characters to life, making it seem as if listeners are overhearing conversations between strangers. In more than one way, Pirates is a self-contained theatrical production in which Jones’ singing is the star attraction. Her moody whispers, cries, and coos are the voices of spurned lovers, alienated outcasts, and unlikely heroines. Albums with this kind of stylistic magnitude, close-up intimacy, and emotional intensity come around only once or so a decade.  Mobile Fidelity is proud to have had the opportunity to remaster Pirates from the original analog master tapes and produce a version that captures every nuance of this great-sounding studio masterpiece. Co-produced by Russ Titelman and Lenny Waronker (whose long list of credits include Randy Newman, James Taylor, and Eric Clapton records), trust us when we say that this 180-gram LP is one of the finest-sounding pop records you’ll hear. Fans of Steely Dan, Joni Mitchell, Randy Newman, Carole King, and Sarah Vaughan should consider this requisite listening. "Jones as usual, assembled an all-star supporting cast including the likes of Tom Scott, David Sanborn, Donald Fagen and Randy Brecker. In contrast to today's albums with 16 tracks and 2 listenable songs, Pirates has eight outstanding songs with the likes of "We Belong Together, Living it Up, Lucky Guy, Pirates and Skeletons." - Myles B. Astor, Positive-Feedback.com, Issue 49 "Mobile Fidelity’s ultra-pure playback chain is the ideal conduit for this precise production and the resulting LP and SACD are both opulent and lush sounding without sacrificing transient speed and inner detail." - Michael Fremer, www.musicangle.com, Music 8, Sound 10

Selections: 1. We Belong Together 2. Living It Up 3. Skeletons 4. Woody and Dutch on the Slow Train to Peking 5. Pirates (So Long Lonely Avenue) 6. A Lucky Guy 7. Traces of the Western Slopes 8. The Returns 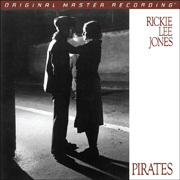