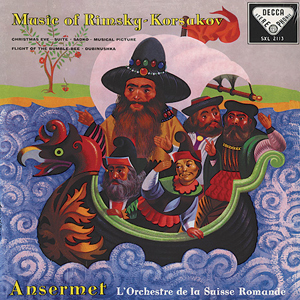 Rimsky-Korsakov was not only a masterly composer of great operas and eloquently powerful symphonies but a genius when it came to the smaller forms, and ample proof is provided by this delightful compilation on the DECCA label. The fairytale, programmatic music of the Christmas Eve Suite conjures up a fantastic world where the stars and planets dance and play above a snowy landscape until the witches’ sabbath begins and Vakula appears on his satanic warhorse. Brimming over with a wealth of highly varied Slavonic dance rhythms, genial instrumentation, and delightful melodies, this Suite offers nothing but pleasure the whole year through.

The musical picture Sadko tells the story of a seafaring hero who is obliged to entertain Neptune at his court with music. Dancing water-spirits evoke a terrible storm from which Sadko only manages to escape with his life thanks to Saint Nicholas. Further attractions are to be found on the B side, namely the pre-revolutionary march Dubinushka (“The little oak stick”), and of course the immensely popular Flight of the Bumble-Bee which is sheer magic in this full orchestral version. If by now your mouth is watering for a taste of these Russian delicacies, just help yourself!

Further attractions are to be found on the B side, namely the pre-revolutionary march Dubinushka (“The little oak stick”), and of course the immensely popular Flight of the Bumble-Bee which is sheer magic in this full orchestral version. If by now your mouth is watering for a taste of these Russian delicacies, just help yourself!

Although Rimsky-Korsakov was hardly a major composer, he was one of the greatest minor composers. His art is severly limited, yhet within those limits he achieved things that are perfect of their kind, and were unique of their kind when he achieved them, though others have imitated or developed them since. And within a relatively small range, he attained remarkable variety; his operas alone show his mastery of the dramatic, the lyrical, the epic and the fantastic. He was much more than a brilliant orchestrator, though he admittedly delighted in orchestral colour for its own sake and regarded it as a primary and essential element of his music. 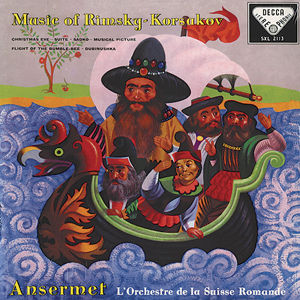