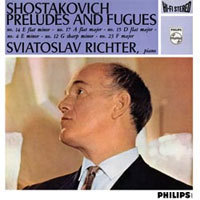 This is a flawless record featuring a great interpretation of even greater music. Highly recommended Audioreview

As little as Shostakovich's Preludes and Fugues conformed to Soviet musical dictates, these ambitious works were all the more highly regarded by the experts. What appeared as decadent and formalistic to Stalinist augurs is no less than an homage to Bach's Well-tempered Clavier in the form of 24 miniatures, in the major and minor keys around the circle of fifths. Shostakovich dedicated his compositions to Tatiana Nikolayeva whom he got to know at the Leipzig Bach Festival in 1950.

Little did he know that she would promote his musical gems right up until her very last breath, when she died on stage while performing his Opus 87 in 1993 in San Francisco. Although Sviatoslav Richter never recorded the complete cycle of Preludes and Fugues, the present recording with his personal selection is one of the most distinguished interpretations of these works. Richter's refined performance brings out the strict form found within the modern compositional style, allowing the biting sarcasm or ludicrous melodies to sparkle, and explores archaic rhythms.

But Richter, the experienced romanticist, is also a master of Schumannesque expression in the form of languid melodiousness in the middle range of the keyboard. At long last this hard-to-find, yet easy to listen to, recording is available once more. "Sviatoslav Richter was born in 1915. He began formal training exceptionally late. Up to the year 1937, when he was twenty-two, his main ambition was to become a conductor and he had made steps towards fulfilling this by taking up the post of conductor at the Odessa Opera. But then, more or less unannounced, he presented himself for piano-tuition under Heinrich Neuhaus in Moscow and the latter at once perceived that Richter had very little to learn. 'He sat down at the piano, put his big, supple, nervous hands on the keys and began to play.

I whispered to another pupil: "In my opinion he's a musician of genius." I must say frankly that there was nothing I could teach Richter in the generally accepted meaning of teaching. I always held merely a position of counsellor.' Long before he began to tour in the West, Richter's name had taken on the proportions of a legend. Rumours and hints of his genius, together with a handful of poorish records, were enough to create an anticipatory wave of expectation which any pianist might have found daunting. Richter, when he first appeared in the West in 1960, triumphantly exceeded it; and since then, cooler estimates of his capacity have only served to confirm the original impression." - from liner notes by Derek Jole Features: 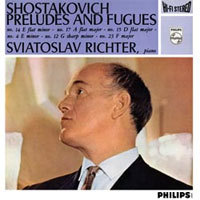