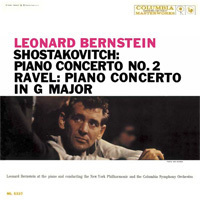 You'll never confuse Shostakovich's Piano Concerto No. 2 composed in 1957 with piano concertos composed during the romantic era, except when you get to the squooshy center where the composer goes all Rachmaninoff on you. The cinematic first movement sounds both ominous and light-hearted like a Hitchcock chase scene and it's easy to hear how Bernard Herrmann may have been influenced by this rousing first movement. It will get your heart pounding.

The second movement has the stamp of Russian gravitas in the opening bars and then softens to the exquisite Rachmaninoff-like melodic line from which Bernstein pulls all of the emotional longing and heart-tugging beauty. The third movement returns to the angular, chase-like motif of the first and ends with a rousing finale.

Bernstein performed and conducted the American debut of the piece, and recorded it in January of 1958 in the Colorama Ballroom of the Saint George Hotel, the site of his iconic recording of "Rhapsody In Blue."

Ravel wrote his Piano Concerto in G Major years after Gershwin wrote "Rhapsody In Blue" in 1924, so when you immediately recognize Gershwin in Ravel's piece, know that Ravel wrote this piece in 1931. After writing "Rhapsody In Blue" Gershwin went to Paris where he asked Ravel for lessons but was turned down because Ravel didn't want to possibly ruin his jazzy style.

Despite the Gershwinesque opening sections and some jazzy interludes of his own, complete with an ascending clarinet line at one point, the piece quickly becomes easily recognizable as Ravel's as the colors shine through and the impressionistic arrangement yields fantasmagoric images.

Both pieces are easily accessible even to the classical music-challenged listener.

Even though Columbia was never known as a sound label, particularly compared to RCA, Mercury in America and British Decca and EMI in England (Columbia, unlike the others rarely if ever divulged engineer or recording venue) it did produce its share of sonically superb recordings and this is one of them.

The Shostakovich recording has greater ambience and more hall presence because of where it was recorded. The Ravel was recorded in April of 1958 at Columbia's famed 30th Street Studio, a former church, and while it had wonderful ambience for jazz, it couldn't produce the spaciousness of a large hall.

Don't expect the deep, vast soundstages found on British Deccas or many RCAs. Instead, this one is relatively closely but simply miked, more like some Mercurys. Bernstein's piano is very nicely recorded and well focused and the orchestra is spread neatly behind. There's more space on the Shostakovich, but both have glorious harmonics and impressive dynamics. 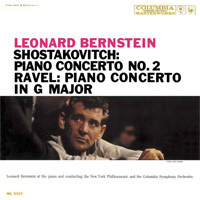