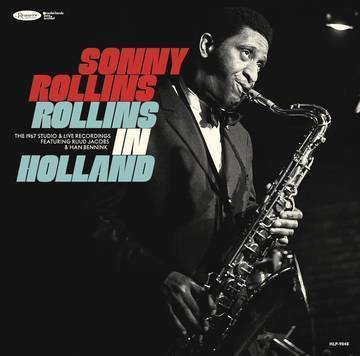 Rollins in Holland: The 1967 Studio & Live Recordings  archival release from the Saxophone Colossus himself, Sonny Rollins.

Released in partnership with the Nederlands Jazz Archief, this deluxe limited-edition 180g 3LP set is officially sanctioned by Rollins and is comprised of three different previously unissued performances with bassist Ruud Jacobs and drummer Han Bennink in May of 1967 at Vara Studio in Hilversum, the Arnhem Academy of Visual Arts, and a televised performance at the Go-Go Club in Loosdrecht.

Rollins in Holland will include an extensive booklet with never-before-published photos from each venue; essays by Aidan Levy (currently writing a biography of Sonny Rollins for Da Capo Press) and Dutch jazz journalist/producer Frank Jochemsen; plus interviews with Sonny Rollins, Han Bennink, a remembrance of Ruud Jacobs, and more.