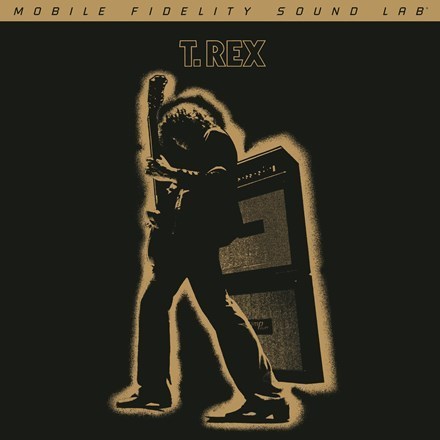 I can assure you that you've never heard them sound this visceral nor as uncontrollably infectious. Gorgeous details, like Flo & Eddie's backing vocals, make forensic listening forgivable.Hifi News

Some might question the premium  price of this numbered limited edition. However, it's far less than collectors routinely pay for dog-eared original pressings of this record – and is likely to command more on the secondhand market in years to come. As you'd expect from this label, it's done to the company's usual sublime standards in terms of mastering, pressing and packaging. Spread over two 45RPM 180g twelve-inch discs, it plays dramatically better than other versions I've heard, including my own Japanese first pressing – with an inky-black background and a wonderful lustre to Bolan's lead guitar. Mobile Fidelity's version of Electric Warrior is a fitting tribute to one of the most important Rock albums of the nineteen seventies, and beyond.David Price Sterenet

Mastered on Mobile Fidelity's state-of-the-art mastering system, pressed on dead-quiet vinyl at RTI, and housed in a gatefold sleeve, the label's numbered-edition 180g 45RPM 2LP set gives the 1971 landmark the widescreen sound quality it has always deserved. Tony Visconti's warm, reverb-soaked production and Roy Thomas Baker's ace engineering remain two of the work's most famous and revered elements. Here, the production and music can be experienced in all its full-tilt glory, from the subtle albeit elegant classical touches to the instantly identifiable Les Paul guitar licks to Bolan's sensual, wispy, are-they-or-aren't-they-serious vocals.

As Sean Egan wrote in the liner notes of a long-out-of-print reissue: "The sound is recognizably rock, yet a previously unheard exotic variant, almost as if concocted by inhabitants of one of the Tolkien-esque worlds common in Bolan's lyrics. The strings are overt but discreet in shape and tone, injecting just the right amount of class." All these aspects and more come to life with a realism, vibrancy, detail, and textural palpability that surpass the presentation on any prior analog edition. If you can hear colors, this audiophile version of Electric Warrior will stimulate your inner synesthesia.

Secure your collectible copy of Electric Warrior from today!