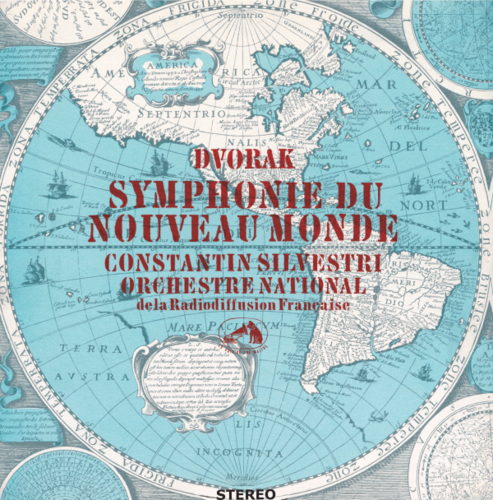 Limited Edition - Pressed in Germany:
AAA 100% Analogue This LP was Remastered using Pure Analogue Components Only, from the Master Tapes through to the Cutting Head

Dvorak: Symphony No. 5, Op. 95
Dvorak's fame quickly became international. He was called to direct his works in most European countries, and even in distant America. In the latter country he made deep friendships, and pressure was soon put on him to consent to his settlement. Finally giving in to his friends, Dvorak accepted the post of Director of the New York Conservatory in 1892, a position he was to occupy for four years. This stay, far from his beloved homeland - if he was happy at first - soon became a musician, who could not be solicited for his exile. His creative work, however, knew no interruption during this whole period.

The most important of the compositions that Dvorak wrote - while he was still very happy to be in contact with this unknown universe - was the Symphony in E minor op. 95, completed in 1893, the year following his installation in New York.

His deep instinct, which led him to take an interest in popular art from the start, made him enthusiastic about the songs and dances of black Americans. But it would be a mistake to believe that Dvorak borrowed American folklore for his symphony. He has often explained it many times. He has at most proceeded as with the folklore of his native country, absorbing the songs and rhythms of the American Negroes, but giving us, from this starting point, an original creation. There is even a curious fact: one of Dvorak's pupils, WA Fischer, had the idea of ​​transcribing for a vocal ensemble the magnificent melody sung by the English horn in the "largo" of the New Symphony. World. Under this form, this melody became so popular in the United States that some critics regarded it as an authentic folk song, inserted by Dvorak in his work. What better tribute for a creator than to see the people from whom he was inspired immediately adopt his thought, and use it so quickly, as if it were an integral part of his own funds?

The New World Symphony consists of four movements which, in the main, correspond to traditional molds, but where the abundance of motifs often gives the discourse a rapsodic character. However, some of his motifs move from one movement to another, and give the work a solid unity.

The first death, Allegro molto, is preceded by a slow introduction, Adagio, of great nobility. This first movement corresponds, in outline, to an allegro of sonata. Although not giving rise to much work, his themes are of such melodic richness that their expressive virtues are enough to sustain the momentum of this particularly inspired page.

The second movement, Largo, is undoubtedly the most beautiful passage of the score. After a short introduction, the English horn sings a wide melody, a poetic nostalgia. After a more animated central part, this theme, preceded by a reminder of the first movement, is re-displayed with some variations.

The third movement, Scherzo molto vivace - after the bounding and angular rhythms of its first part - has a central part (trio) that seems to remember the rhythms of the composer's native country. The return of the main part of the scherzo is preceded by a reminder of the two main themes of the first movement.

The fourth movement, Allegro con fuoco, begins with a theme of imperious character, exposed by the brass. This theme, amply developed, will oppose a drawing of singing pace entrusted to the clarinet, and which will bloom to the strings. These two themes will provide the main subject of the piece, to which will also contribute reminders of the essential themes of the other movements. The symphony ends in the apotheosis of the initial theme of the Allegro con fuoco.

Symphonie Nº 5 En Mi Mineur Op. 95 " Nouveau Monde"
A1 I. Adagio - Allegro Molto
A2 II. Largo
B1 III. Scherzo (Molto Vivace)
B2 IV. Allegro Con Fuoco
LP  bears the label No. 5 here, as it was the fifth to be published, this symphony is actually the ninth Dvořák wrote and is known today as No. 9.