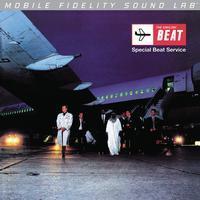 In the early 1980s, many bands began borrowing styles initially made popular in other regions of the world, spicing their own sound up with exotic textures and foreign rhythms. Few groups perfected the mix-and-match hybrid with more everlasting appeal and contagious melodicism than The English Beat, a multi-cultural ensemble whose Special Beat Service dominated the charts, scored with the critics, and captivated listeners.

Blending jazzy saxophones, pop hooks, calypso accents, firm beats, jangly guitars, and scores of other creative devices, the 1982 set has always been ripe for sonic restoration. Mastered on Mobile Fidelity’s world-renowned mastering system and pressed at RTI (the best record plant in North America), Silver Label numbered limited edition LP brings the music’s colorful flair and cross-continental vibes to the fore, eliminating the haze and artificial ceilings that flaw previous pressings. The Caribbean flavors, dub pulses, and irresistible refrains now jump with palpable energy and feet-tapping verve. You’ll be addicted as soon as the needle drops into the first grooves of the record. A feel-good set from start to finish, Special Beat Service bows down to the power of great pop. But within this framework,

The English Beat weaves in brilliant threads of music plucked from Jamaica (reggae and dub), its native England (new wave and Merseybeat), and the United States (post-punk and Motown). While many recognize them as Two-Tone ska revivalists, the group’s arrangements reach far beyond any label, a breadth immediately recognized on multifaceted tracks such as “Sugar & Stress,” “Ackee 123,” and “Sole Salvation.”

In particular, the band’s “Save It For Later” became an anthem that is still heard today. A precursor to the influential Britpop sound that followed nearly a decade later, the hit rides on a flexible bass line, sly sexual lyrics, and rolling guitar-driven lines that even the Beatles would envy. Years ago, Pearl Jam resurrected the classic by tacking it onto the end of its “Betterman” in concert, and to this day, it remains a live favorite. You need to experience the original in the highest-possible fidelity.
No mere revivalists or retro-minded purveyors, The English Beat created a true 80s pop masterpiece with Special Beat Service. Mobile Fidelity Silver Series’ LP presents the songs as they were meant to be heard, and will have you dancing in no time. If you're a fan of the Police, Madness, The Specials, The Clash, The Jam, or the Wailers, you need this LP.
Accordion  – Jack Emblow
Bass, Banjo – David Steele
Drums – Everett Morton
Guitar, Mandolin – Andy Cox
Keyboards, Piano – Dave Blockhead
Trombone – Vince Sullivan
Trumpet – Dave Lord, Steve Sidwell
Vocals, Guitar – Dave Wakeling
The English Beat Special Beat Service Track Listing:
1. "I Confess" – 4:34
2. "Jeanette" – 2:46
3. "Sorry" – 2:33
4. "Sole Salvation" – 3:05
5. "Spar Wid Me" – 4:32
6. "Rotating Head" – 3:24
7. "Save It for Later" – 3:34
8. "She's Going" – 2:10
9. "Pato and Roger a Go Talk" – 3:19
10. "Sugar and Stress" – 2:57
11. "End of the Party" – 3:32
12. "Ackee 1-2-3" – 3:12 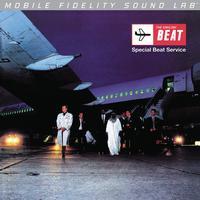 GAIN 2 Ultra Analog™ is a proprietary cutting system built and designed by legendary design genius Tim De Paravicini, with consultation from one of MFSL’s founding fathers – Stan Ricker, an audio engineer responsible for many of MFSL’s most heralded past releases.
The GAIN 2 Ultra Analog™ system is comprised of a Studer™ tape machine with customized reproduction electronics* and handcrafted cutting amps that drive an Ortofon cutting head on a restored Neumann VMS-70 lathe. (*It is worth noting that independent studies have confirmed that the GAIN 2 Ultra Analog™ system can unveil sonic information all the way up to 122kHz!)
First and foremost, we only utilize first generation original master recordings as source material for our releases. We then play back master tapes at half speed enabling the GAIN 2 Ultra Analog™ system to fully extract the master’s sonic information. Our lacquers are then plated in a specialized process that protects transients in the musical signal. (Due to this process, there may be occasional pops or ticks inherent in initial play back, but as the disc is played more, a high quality stylus will actually polish the grooves and improve the sound). We further ensure optimum sound quality by strictly limiting the number of pressings printed for each release. These limited editions, in addition to being collectors’ items, ensure that the quality of the last pressing matches the quality of the first.
As you can imagine, all these efforts involve a tremendous amount of time, technology, cost and effort. The introduction of GAIN 2 Ultra Analog™ maintains Mobile Fidelity Sound Lab’s position as the world’s leading audiophile record label, where a passion for music with extraordinary sound quality matters most.
RTI  HQ Vinyl
Record Technology is a world class record pressing plant located in Camarillo, California. We have been operating since 1974, pressing for most audiophile record labels and for many quality minded independent and major record labels from around the world.