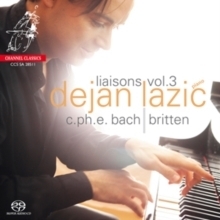 The depth of tone and dynamic range of Lazic’s Steinway D is captured in a warm but clear acoustic that could hardly be bettered.Those who have acquired Dejan Lazic’s two earlier ‘Liaison’ discs Liaisons Vol. 1 - Dejan Lazic and Liaisons, Vol. 2 - Dejan Lazic will need little encouragement to investigate the latest intriguing release by this phenomenal musician. Those who have yet to investigate ‘Liaisons’ have a real treat awaiting them. Sound 5/5 HRaudio

The modern Steinway grand seems a bit of a blunt instrument to convey the full range of Bach's individuality, but Lazic's fastidiously articulated fingerwork and his feel for CPE's cultivated waywardness are persuasive. He toys with the finale of the D minor Sonata like a precision-powered cat with a mouse, and La Bohmer positively fizzes. He also turns the pages of Britten's pungent Holiday Diary with a compelling, sometimes Puckish, narrative flair.- BBC Music

Gramophone Magazine
This is Vol. 3 of Lazic's series entitled 'Liaisons' - unexpected pairings of composers who we might not necessarily expect to have much in common...Lazic's unpredictable union works surprisingly well. His feather-light despatch of the D minor Sonata's last-movement variations almost melts into the first of Britten's early Five Waltzes.

“A musician cannot move others unless he too is moved.”
C. Ph. E. Bach