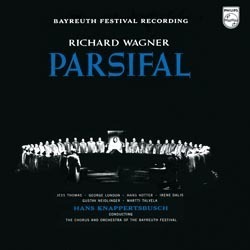 This five-LP set will run you about $165, a lot of money for one opera (albeit a four-hour-plus opera.) Is it worth it? Well, the sound is terrific, the packaging exquisite, and—most importantly—the performance is nonpareil. I’m a Wagner collector and if limited to just one Parsifal for all eternity, this would be the one. Yes, it’s worth it.  Andrew Quint - The Absolute Sound

The original pressings are not easy to find, although there were three different re-issues and box-sets ) where the sound decreased in quality with each issue. So, if one wants the best sound, it has to be this Speakers Corner disc. Classical Source

Anyone who has sat on the hard chairs in Bayreuth to be immersed in Wagner’s surging waves knows that this hardship has been well worth it. The special acoustics of the Festspielhaus (for the building of which Wagner bled the Bavarian King Ludwig II like the Knights of the Grail bled Amfortas) are not purely a delight for pilgrims to the Grüner Hügel: record collectors will instantly recognise why music recorded in Bayreuth is not simply labelled 'Live Recording' but presented as an 'Original Recording'.

And indeed, the artistic excellence of the present "Parsifal" also contributes to the myths surrounding the Festival. Jess Thomas portrays the title role ideally, singing with an intense, heroic sound and clear articulation. George London, who personally suffered tragedy, creates a monument for himself as the wounded Amfortas, while Hans Hotter sings with the powerful baritone of an erudite but by no means antiquated Gurnemanz.

No less legendary is Hans Knappertsbusch’s musical direction: a 'high priest' of slower tempos, his conducting was miraculously never felt to be sluggish. Gurnemanz’s mystic words "Zum Raum wird hier die Zeit" (Time here becomes space) take on a programmatic meaning for both the music and sound of this recording.

Speakers Corner transfers are fully the equal of the originals; with perhaps better orchestral definition and clarity

Speakers Corner continues to produce the highest quality classical music reissues. While owning many of the reissues, the most recent addition is Wagner's Parsifal. I am not a fan of opera, but this pressing caught my attention given it was recorded at Bayreuth.  On par with previous Speakers Corner products, the set of 5 LPs are perfectly flat and the surface noise is non-existent. Easily the quietest LP set I have. Voices and musical nuances are easily detected given the stealth black background.   Yes, you can hear the audience occasionally on this live recording. I find the occasional cough or bodies rustling make this performance all the more lifelike. I feel as though I am in the audience.   Once again, opera is not my forte, but I must say that I really enjoy listening to this recording because of its lifelike qualities and the tonality is just right on my system. Dynamics and transients are very good, with usual solid frequency balance across the spectrum. Sonically, I can't find any faults.
One of the more interesting aspects of this recording is listening to a soloist (acapella). The recording easily conveys the phase differences when the singer is facing toward the microphone vs. facing backwards. The voice phasing alters as the singer faces difference. It is easy to detect and once agains, adds to the realism of this live recording.I heartily recommend this LP set for anybody interested in great musing and sonic pleasures.
Here the balance is forward without any sense of stridency. The singers are clearly behind and above the orchestra (Bayreuth has a sunken orchestra pit) and there is a clear sense of acoustic and space. All of the soloists have presence and body, and the chorus is exceptionally full-toned, while the orchestra has both fullness and definition, and the sound expands superbly at climaxes. It is doubtful if any other performance at the Festspielhaus has been so well captured, and the Speakers Corner transfers are fully the equal of the originals; with perhaps better orchestral definition and clarity. With regard to the originals they are – it almost goes without saying – rare and the price for perfect copies in the last year has averaged around £200.00. While some of the later solid-state remasterings are very good, they all lack the weight and power of the earlier ones. There is little point in comparing these Speakers Corner discs with CD transfers, as digital sound is completely incapable of capturing the acoustic and ambience of any venue – let alone one so distinctive as Bayreuth – or the natural timbre of the human voice.- Classicalsource