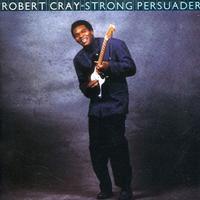 One of the most popular and successful blues albums ever released

Robert Cray is a musician that critics describe as one of the all-time great blues guitarists, and small wonder. No less than Rolling Stone describes his playing as distinctive and razor-sharp. They go on to say that Strong Persuader "introduced a new generation of mainstream rock fans to the language and form of the blues." As much as anyone next to Stevie Ray Vaughan, Cray helped the blues not only survive, but thrive,

The set that made Cray a pop star, despite its enduring blues base. Cray's smoldering stance on "Smoking Gun" and "Right Next Door" rendered him the first sex symbol to emerge from the blues field in decades, but it was his innovative expansion of the genre itself that makes this album a genuine 1980s classic.

"Nothing but a Woman" boasts an irresistible groove pushed by the Memphis Horns and some metaphorically inspired lyrics, while "I Wonder" and "Guess I Showed Her" sizzle with sensuality.

With a Blues Hall of Fame induction, 5 Grammy Awards, millions of record sales, and thousands of sold out performances around the world, blues icon Robert Cray is befitting of his reputation as “one of the greatest guitarists of his generation.” Rolling Stone credits Cray with reinventing the blues with his “distinct razor sharp guitar playing” that “introduced a new generation of mainstream rock fans to the language and form of the blues” with the release of 1986's Strong Persuader.
Serving as Cray's fourth full-length solo effort overall and commercial breakthrough, the sensual 10-song set climbed to #13 on the Billboard 200 which was the highest-charting blues album since Bobby 'Blue' Bland's 1963 release Call On Me/That's the Way Love Is. Featuring the slow burning classics "Smoking Gun," "Right Next Door" and "Nothing But A Woman" with the Memphis Horns, Strong Persuader also made Cray one of the Blues' first sex symbols in decades.
Analogue Productions is pleased to offer Robert Cray's landmark blues album Strong Persuader on 200g vinyl remastered from the original analog tape by Ryan Smith at Sterling Sound and pressed at Quality Record Pressings. 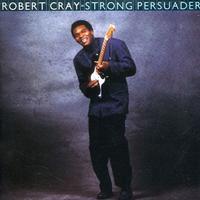