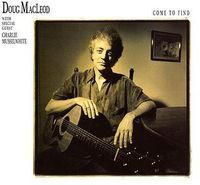 Come to Find is the first of what I hope is to be a continuing series of outstanding albums pairing producer Joe Harley of AudioQuest Music with Doug MacLeod's special gift for the blues (the second record from this series, You Can't Take My Blues, was released last year and could just as easily have been my choice.) All but two of the 11 songs here were penned by MacLeod---and there's not a weak number among them. With cuts like "Master's Plan," "Lost Something This Morning," Willie Dixon's "Bring It On Home," or the title cut, it's hard to go wrong. My favorite seems to be whichever one I'm listening to at the moment.
The project was recorded live, direct to two-track, in two days of January 1994 at Ocean Way Recording under the steady hand of Michael C. Ross, followed with mastering by Bernie Grundman. The LP portion of the project received the best of care, the late Ed Tobin handling the plating chores. Not surprisingly, the sonics are spectacular---"audiophile" music at its best, and a record I wouldn't be without. www.stereophile.com

And for those who love blues already, this is one of the best-sounding, most original works you'll ever likely to hear!
Musicians:
- Doug MacLeod (guitar, vocals)
- Charlie Musselwhite (harmonica)
- Bill Stuve (acoustic bass)
- Jimi Bott (drums)
- Black Cherry (back up vocals)