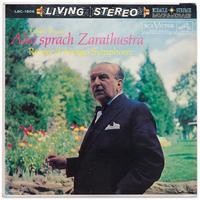 "These records are definitive." — Michael Fremer, editor, AnalogPlanet.comWinner of a Gruvy Award, chosen by AnalogPlanet's editor, Michael Fremer, for vinyl records that are musically and sonically outstanding and are also well mastered and pressed.

"...I'd have to say that the usual stumbling blocks have been sidestepped.

Great care has been taken to do the right things, starting with the way the decision to remaster these RCAs was made."  Jonathan Valin, The Absolute Sound

RCA's "golden age" was more like a "golden minute" - in a scant period, roughly from 1958 to 1963, the beginning of the stereo era - pure vacuum tube amplification helped produce recordings demonstrating unparalleled fidelity and warmth, lifelike presence and midband illumination.

The legendary 1954 Fritz Reiner/Chicago Symphony Orchestra performance of a Strauss war horse. Recorded directly to 2-track analog tape by Jack Pfeiffer; the original session tapes were used in mastering for the LPs and SACDS. Among the very first Living Stereo recordings ever made, these landmark performances document the start of the legendary partnership of Fritz Reiner and the Chicago Symphony Orchestra.

Also Sprach Zarathustra, Op. 30 (Thus Spoke Zarathustra or Thus Spake Zarathustra) is a tone poem by Richard Strauss, composed in 1896 and inspired by Friedrich Nietzsche's philosophical novel of the same name. The composer conducted its first performance on November 27, 1896 in Frankfurt. A typical performance lasts half an hour. The work has been part of the classical repertoire since its first performance in 1896. The initial fanfare – entitled "Sunrise" in the composer's program notes – became particularly well-known after its use in Stanley Kubrick's 1968 film 2001: A Space Odyssey

These new versions are clearer than the originals and warmer and richer than past reissues!

1.   Also Sprach Zarathustra, Op. 30 (Thus Spake Zarathustra) (Part 1)
2.   Also Sprach Zarathustra, Op. 30 (Thus Spake Zarathustra) (Concluded)
Pressed at Quality Record Pressings and plated by Gary Salstrom. Packaged in the original tip-on jacket facsimiles that precisely duplicate the original cover art, including the "Living Stereo" logo, LSC numbers and "Shaded Dog" label. These reissues are designed from the mastering, to the cutting, to the pressing and packaging to be the finest RCA Living Stereo LPs ever reissued. These new versions are clearer than the originals and warmer and richer than past reissues! 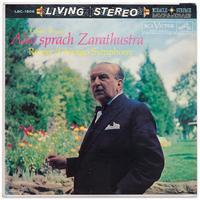