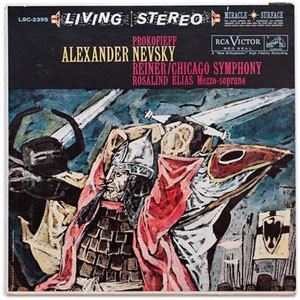 RCA's "golden age" was more like a "golden minute" - in a scant period, roughly from 1958 to 1963, the beginning of the stereo era - pure vacuum tube amplification helped produce recordings demonstrating unparalleled fidelity and warmth, lifelike presence and midband illumination.
RCA Living Stereo classical LPs - the gold standard for top quality orchestral performance and sound! "...I'd have to say that the usual stumbling blocks have been sidestepped.
Great care has been taken to do the right things, starting with the way the decision to remaster these RCAs was made." Jonathan Valin, The Absolute Sound.

Following the first performance, Dan Tucker in the American reported that Prokofiev’s score “may well be the finest movie music ever written. That does not mean it’s great music: you can’t write great music for a film because it would distract the audience’s attention and ruin the film. Prokofiev did a wonderful job, though, in writing music to heighten the moods of somber grandeur or heroic fervor. If it isn’t ‘great’ in itself, it is admirably suited to a great subject. There is a splendor about the mere sound of massed chorus and orchestra that this core exploits to the full.” .

In the Chicago Tribune, even though Claudia Cassidy lamented the absence of the film, she praised the work of the Chorus (only in its second season), “at its best in the enthusiasm of attack, a fresh, accurate, all-out attack which might actually have been defending Mother Russia.”

And in the Daily News, Donal Henahan added: “The fever and excitement latent in this muscular music originally part of the score for the Sergei Eisenstein movie, was brought out by Reiner gradually with a slow-fuse sort of detonation. The climactic ‘Battle on the Ice’ was approached with expansive calm and deliberation, and thus aroused the audience’s martial blood properly. A conductor who tries to pile climax after climax into this work can never achieve the hair-raising thrust that Reiner drew from Margaret Hillis‘s Chicago Symphony Chorus [singing in English] at such a moment. No one can write a march like Prokofiev, and it was grand to hear this one played with power but without hysterics. The chorus, although called on for less heroic vocal effort that in some other works it has sung, produced a pleasing sound in all voices and a more homogeneous tone than at any time since Miss Hillis began her missionary work in Chicago.”

The subsequent recording—the first collaboration with the Orchestra and the Chicago Symphony Chorus—was made on March 7, 1959, at Orchestra Hall. Richard Mohr was the producer and Lewis Layton was the recording engineer.