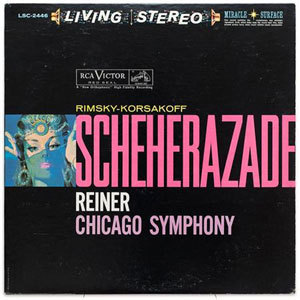 2015 Stereophile Magazine Record to Die For!

All collectors of RCA Living Stereo LPs have their favorites, and these are mine. ... I've been disappointed by all the reissues released over the last 20 years that have promised better sound than the originals but have fallen far short of that. I had much higher expectations of these new reissues, from Chad Kassem's Quality Record Pressings, having been very impressed by some of QRP's rock and jazz reissues. When I spun them, I was floored. After comparing them to early shaded-dog pressings of the same recordings, I felt the only area in which the originals were still superior was the subtle, additional layer of air and sparkle in the highs (master-tape age, perhaps?). But the reissues' quality and extension of bass and high-level dynamic contrasts were superior. And the surfaces of the new pressings are so quiet they let each subtle midrange detail emerge from a "black" background. At times, the background is so silent I have to do a double take to verify that the needle is still in the groove and the platter is still turning." — Robert J. Reina, Stereophile

The Golden Dozen LPs – Harry Pearson, The Absolute Sound The jewel in the Living Stereo crown. This, like the Respighi, is considered one of the very best LPs by Reiner, the Chicago Symphony Orchestra and RCA's crew. Another Mohr and Layton classic. "...I'd have to say that the usual stumbling blocks have been sidestepped. Great care has been taken to do the right things, starting with the way the decision to remaster these RCAs was made." - Jonathan Valin, The Absolute Sound.com

This ravishing beauty, originally released in 1960 or fifty three years ago, has been a long-time audiophile classic. It's also considering to be among the finest if not the finest performance on record or any other format. Sound 10/10 Music 10/10 Michael Fremmer Analogue Planet

The original tapes were in the New York area so Kassem enlisted Sterling Sound and George Marino trained cutting engineer Ryan Smith. Tapes were played back on the late Marino's Mike Spitz modifier ATR 102 and lacquers cut on Sterling Sound's VMS 80 lathe meticulous maintained by Barry Wolifson and sent to Kassem's Salina Kansas based QRP pressing plant.
The results were so far superior in his opinion to what the older metal parts produced that he decided to green light an ambitious RCA Living Stereo reissue program using original 3 and 2 track tapes, all cut by the young Mr. Smith and plated and pressed at QRP. Kassem's reissued feature "Tip-On" jackets like the originals and meticulous attention was paid to the artwork. If you look at the back jacket of this release and compare the photo of Fritz Reiner there to Classic's you'll see a dramatic difference. The Analogue Productions version's photo is dramatically better. In fact it's better than the original as well as is the entire physical packaging.
As for the sound, well I get into arguments all to often with people who insist originals are always better. If after comparing this reissue to the original they still think so, they are hopelessly prejudiced. This reissue easily beats the original I have in every category Of course the original can't begin to approach the 200g QRP pressing quality, especially in terms of velvet-black backgrounds and perfect surfaces. The reissue is far more dynamic, the low frequency extension complete, and most importantly the instrumental textures and tonalities are rich, full and spectacularly transparent. All of the delicacy, three-dimensionality and transparency promised but only partly delivered by the original is fully communicated on this Analogue Productions reissue.
Both the music and the sound are transportive, making this easy to recommend even if you think you don't like "classical" music. If you're looking for a way "in" here it is!

"(Analogue Productions) has been updating LP pressings of some classic RCA recordings, using today's state-of-the-art technology found at (Quality Record Pressings)... None of (the) resurrections is more gorgeous than (the) revivication of the classic Fritz Reiner / Chicago Scheherazade, itself a knockout of a recording in its Living Stereo issue. (Except, maybe Analogue Productions new version of the Reiner,

"We compared this new 200-gram, 33-rpm LP from Analogue Productions with the original RCA Living Stereo issue, and Classic Records 33rpm version, and were surprised at the outcome. Why? Because to these ears, the new Analogue Productions version was the more relaxed and natural sounding of the bunch. The sound is as it should be, inviting the listener into the music and entirely consonant with Reiner's readings. This transfer bespeaks a confidence in the sound on the master tape, without the artificial touch-ups (a brightness) later found in the original Living Stereo pressing and the more pronounced jiggering in the version from Classic Records.

"RCA graced this recording with some of their best engineering. Rimsky's orchestration seems tailor-made for a sonic showcase and this is exactly what the RCA engineers gave Reiner's well-nigh perfect reading.  It is a reading of great subtlety and romanticism, which brings this too-often played piece to a newfound life.  And so worth getting to know again if you've drifted away from it. 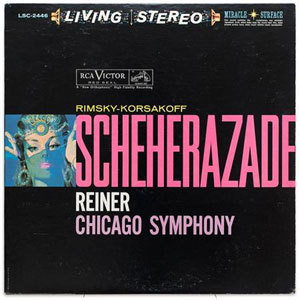