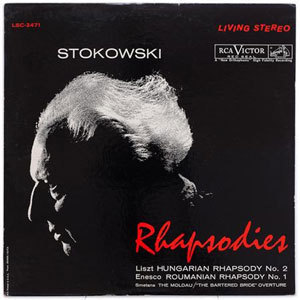 Next up is the amazing Stokowski Rhapsodies (LSC-2471). This is a sensational release, and one that is fun to play for your friends. It is a powerful recording, with lots of Stoky flare and fire. The pickup orchestra and recording team could not dim Leopold as he compelled his orchestral forces to new levels of feeling and rhythm. This is a WOW recording

RCA's studio orchestra of the late '50s and early '60s, plays with more power than polish and more color than control, but, since that was probably what Stokowski was looking for, it only enhances the performance. RCA's Living Stereo sound was stunning in its day and staggering in our day. While certainly not for late-night listening, this disc will surely get you up in the morning

Maestro Stokowski is at the podium and Bob Simpson is at the 3-track Ampex recorder to capture the Rhapsodies from Liszt, Enesco and Smetana that give this issue its title.

This is titanic sound that will sink most speakers and amps for that matter.

The original 3-track session tapes were used in mastering this LP from the Analogue Production reissue series. Features: 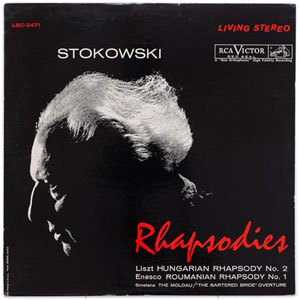