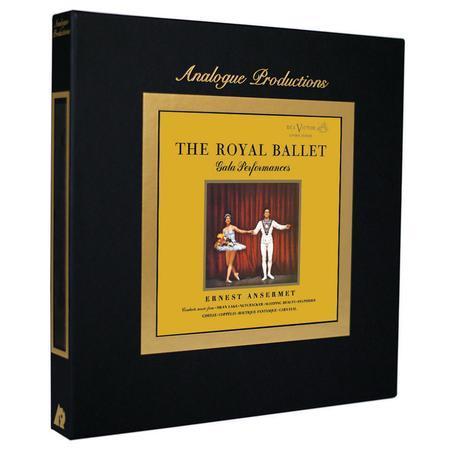 Mastered by Bernie Grundman from the original analog tape

Please note: Side 10 of this release is a repeat of side 1

In the hearts of thousands, No. 1 on the Top RCA list. While the bulk of Ernest Ansermet's recordings were made with L'Orchestre de la Susise Romande, there were a few with the Paris Conservatoire Orchestra and the very occasional foray into recordings with London orchestras, one of these being with the Orchestra of the Royal Opera House, Covent Garden, in 1959.

Analogue Productions  is proud and excited to be bringing back such a classic. Not just for the music, which is superb, but also for the detailed packaging, which in this case takes the form of a 22-page lavishly illustrated book that's integrated into the tip-on gatefold jacket for two of the LPs in this new 5LP 45 RPM box set edition.

A word about 45 RPM: The dead-quiet LPs, with the music spread over nine sides of vinyl (the 10th side repeats side 1), reduces distortion and high frequency loss as the wider-spaced grooves let your stereo cartridge track more accurately. But it's more than just the vinyl that makes this release so special.

If you're new to ballet, this pictorial history will introduce you to some of its most famous productions — old favorites such as The Nutcracker, Swan Lake and The Sleeping Beauty, for example — but also less familiar tales such as Carnaval, Les Sylphides and Coppélia. You'll also make the aquaintance of famous ballerinas of the Royal company, such as Margot Fonteyn, Nadia Nerina and Beryl Grey. as well as choreographers such as Jules Perrot and male dancers Alexis Rassine and Michael Somes.

Audiophilia Online Magazine wrote: "This is the stuff of which dreams are made. The Royal Ballet Gala is one of the finest RCAs recorded in London's Kingsway Hall. The chunks of great ballet music are well served by orchestra, conductor and engineer. Performances are executed to a very high standard - the Royal Opera House Orchestra, both then and now, rank as one of the finest of opera orchestras.

"Conductor Ansermet keeps the pace moving, giving the listener the impression of a dance event rather than a dramatic concert hall reading. With the exception of some of the Tchaikovsky scenes, the music is light and remains so under Ansermet's gentle touch. Each ballet is given full attention by the players, something not always attained at Covent Garden during long ballet nights! The threat of eternity does have it's merits. The recorded sound is simply amazing! Lustrous is one word that comes to mind, accurate is another.

"Tonally, Messrs. Williamson and Wilkinson have used their considerable talents to capture the orchestra superbly. Woodwind and strings glow and resonate, transporting this listener to a time when simpler recording was better. Brass ring out thrillingly and percussion effects are very musical. Be it a bang, swish, rattle, crack or snap, each percussionist is situated perfectly within the beautiful Kingsway soundstage. Even the difficult-to-record sound of the celeste is captured in it's purely mechanical form. It's delicate sound is heard to great effect during the Nutcracker - originating stage left, the sound decays across the stage of Kingsway with sparkling beauty. Wonderful."

• Mastered by Bernie Grundman from the original analog tape